It was shortly before Thanksgiving in an immigration court in San Antonio, and the third defendant to come before Judge Anibal Martinez walked into the courtroom without an attorney, wearing a gray winter hat that was stitched with a pair of blue googly eyes and a floppy red yarn mohawk.

When the bailiff asked his name, he piped up proudly: Wilder Hilario Maldonado Cabrera.

“How old is Wilder?” the immigration judge asked.

An attorney, who was there with other clients, came forward and volunteered to stand in for Wilder. She turned to the boy and in Spanish asked his age.

“Seis años,” he said, 6, his legs dangling from a chair at the defendant’s table.

Wilder, a smiley, pudgy Salvadoran boy, missing his two front teeth, was the youngest defendant on the juvenile docket that day. But that wasn’t all that made him special. He was one of the last children left in government custody who had been affected by the administration’s widely criticized zero-tolerance policy, and who were still awaiting reunification with parents detained in the United States.

The policy, which was announced with great fanfare in April and was scuttled two months later in the face of bipartisan opposition, required immigration authorities to file criminal charges against anyone caught crossing the border illegally and separate them from the children they brought with them.

Sign up for ProPublica’s Big Story newsletter to receive articles and investigations like this one as soon as they’re published.

Over 2,600 immigrant children — including more than 100 who were under the age of 5 — were separated from their parents before a federal judge ordered the administration to end the policy and reunite the families affected. Most have been reunited with parents or other relatives. Around 120 children remain in federal custody because their parents had already been deported. Some 30 cases involve children whose parents have criminal histories. As immigration authorities and advocates scrambled to put the broken families back together, courtrooms like Martinez’s often felt more like family court.

On the day that Wilder appeared, the courtroom was full of minors, most of them teenagers who had not been separated from parents at the border but had migrated to the United States on their own. The boys, wearing pressed slacks and button-down shirts, sat in the back. And there were three very pregnant girls, one of them complaining of pain, in the front.

“I hear we have a child with medical issues?” Martinez said, peering down at her from his dais. “If she’s not comfortable or if she needs to step outside at all, that’s fine.”

One of the first children to be summoned before Martinez was an 11-year-old Guatemalan girl, wearing a flowered dress with her hair tied in a ponytail high on her head.

She sat in a black leather chair and barely said a word, as her attorney, Monica Cueva Kretzschmar, explained that she had admitted to illegally crossing the border and wanted to be sent home to Guatemala to her parents (hers was not a family separation case). The judge asked whether the girl had made the decision of her own free will. She had, the lawyer said. Did her return pose any risks of harm or danger, he asked? The lawyer said no.

Then the judge looked at the girl. “I understand you want to return to your parents in Guatemala,” he said. She nodded back. “I just granted that request. I wish you all the best.”

The girl got up from her seat, grinning and waving a thumbs-up at the attorneys in the audience.

Then it was Wilder’s turn.

The judge asked about the boy’s father. Was he still detained?

The prosecutor said he didn’t know.

He was, in fact, still in federal custody at an immigration detention facility less than an hour’s drive away from the court. The boy and his father had been separated on June 6, after they illegally crossed the border and asked for asylum. Wilder was placed into temporary foster care. His father, Hilario Maldonado, was sent to detention. They’d only sporadically been able to speak on the telephone ever since.

Authorities had determined soon after Maldonado entered the country that he did not qualify for asylum, but they refused to reunite him with his son while that decision was appealed because Maldonado, who lived in the United States more than a decade ago, had an old warrant for a DUI in Florida. It’s a charge that would almost never result in a loss of parental custody in a non-immigration context, but immigration lawyers say they have seen immigration authorities use such minor, nonviolent criminal records to justify separating immigrant parents from their children at the border. Government officials say that while a federal court ordered them to stop separating children under zero tolerance, it exempted cases involving parents who posed security risks to their child. 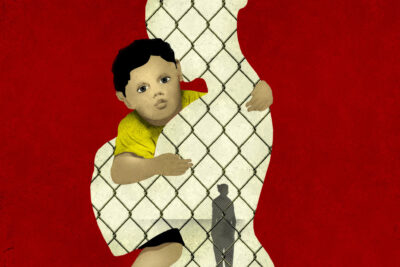 Meanwhile, Wilder’s mother, Maria Elida Cabrera, was still back in El Salvador, struggling for the first time to feed Wilder’s three siblings on her own. She said by phone that Maldonado was the family breadwinner, and since his detention she and her children were surviving with help from immigrant advocacy groups in the United States who’d heard about Wilder’s case.

None of them knew when and if they’d be together again — least of all little Wilder. Born in a remote mountain village at the northern edge of El Salvador, he barely knew what to make of the metal detector at the courthouse, much less why he was in court in the first place.

Before entering the courtroom, the bailiff had to gently nudge the boy through the machine, because he froze in fright at the blinking lights on its side. “No seas nervioso,” she told him, don’t be nervous.

The attorney helped Wilder put on his headphones, so he could hear the court translator, as if language was the only barrier to his ability to follow the whirlwind proceedings.

Then she asked the judge to set aside any decisions about the boy’s asylum claim until Wilder’s lawyer could arrange to be in court with him. The judge agreed.

“Wilder, I wish you well,” he said, sending the boy off to uncertainty. “We’ll see you soon.”

Wilder, a huge Spider-Man fan, waved at the judge, then pretended he was shooting spiderwebs from his wrists. On his way out, he waved to the friendly bailiff and said, “Bye policía.”