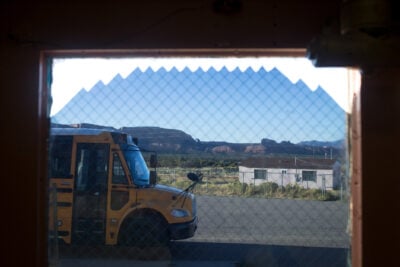 This article was produced in partnership with the Arizona Republic, which is a member of the ProPublica Local Reporting Network.

As some schools on the nation’s largest Native American reservation were ordered to close on account of the coronavirus, students at Rocky Ridge Boarding School in northeast Arizona continued attending class.

School wasn’t supposed to be in session on March 16. Gov. Doug Ducey had declared that public schools would be closed as the state attempted to control the spread of the coronavirus.

But that morning, residents in the tiny Navajo Nation community of Hard Rock spotted buses running their usual routes.

They were headed to Rocky Ridge, a campus where just over 100 students attend kindergarten through eighth grade.

The school didn’t have to comply with Arizona’s mandate. It’s operated by the Bureau of Indian Education, a federal agency that oversees 183 campuses and dormitories across the country.

The agency’s director, Tony Dearman, ordered some campuses to close in a March 14 letter, citing concerns that the virus “may constitute an immediate hazard to health and safety.”

It’s unclear if Rocky Ridge was among those schools. The campus remained open another day and some staff continued meeting for at least two more days, potentially exposing children and teachers to an employee who later tested positive for the virus, according to interviews and texts obtained by the Arizona Republic.

On March 25, employees learned through a text message that a maintenance worker at the school had tested positive for COVID-19. In a Facebook post two days later, acting principal Timothy Clashin announced that the federal government closed the school after it was “infected with the COVID19 virus.”

He also shared that a 55-year-old education technician had died, but said that it was unclear if her death was linked to the coronavirus.

The school’s closure because of the positive coronavirus case was first reported by the Navajo Times a day after the principal’s Facebook post. The post, obtained by the Arizona Republic, has since been deleted.

Neither leaders at Rocky Ridge nor the BIE have publicly released information about whether any other employees contracted the virus. Clashin did not respond to calls or emails seeking an interview. A BIE spokeswoman declined to comment. She would not say how many of the BIE’s schools have discovered cases of the coronavirus, citing an ongoing investigation.

“An investigation is currently underway, and initial information is pending verification,” the spokeswoman, Genevieve Giaccardo, said in an emailed statement. “Indian Affairs cannot share or post information that cannot be verified by investigators and physicians.”

Five people told the Arizona Republic that they knew someone at Rocky Ridge who had become ill. At least four employees and two students became sick with symptoms consistent with COVID-19, according to interviews and text messages.

One employee and her children had fevers and persistent coughs but could not get tested. Another employee is now hospitalized in Phoenix and breathing through a ventilator, his wife said in a text message.

“Everyone was worried about the sickness going around,” said a community resident with family at the school who asked not to be identified.

The virus spread quickly through Navajo Nation, which stretches across parts of Arizona, Utah and New Mexico and has a population of more than 330,000, though not every citizen lives on the reservation.

Tribal leaders confirmed the first positive case, a 46-year-old patient from Chilchinbeto, Arizona, on March 17. The community of about 1,000 people, now considered the epicenter of the coronavirus on the Navajo Nation, was the first on the reservation to receive a shelter-in-place order. Navajo County, which includes Chilchinbeto, has 149 confirmed cases of the coronavirus, the highest of the eight counties on the reservation.

As of Monday evening, the tribe had confirmed 384 cases of the novel coronavirus.

Fifteen people died after contracting the virus, which has been especially deadly in the reservation’s small, remote communities. It has preyed on the tribe’s elderly population and on residents who are all but cut off from health care facilities and other essential services.

Shaken by the rapid spread, tribal leaders have tried to shut down the entire reservation, implementing a nighttime curfew and banning all nonessential travel this coming weekend. Police will fine residents who violate the order.

Nez has predicted that the cases would peak in mid-May.

“They’re Trying to Keep It Under Wraps”

As leaders of the Navajo Nation scramble to shut down activity and share information with tribal members, BIE schools on the reservation have provided few details.

BIE has long been reluctant to release information about its schools or the 46,000 students enrolled in them. Members of Congress complained as recently as last year that the agency had barred employees at an Oregon boarding school from speaking to them, hindering an investigation into a rash of student deaths.

“It’s not just Rocky Ridge Boarding School. It’s BIE,” said a community member with family at the school. The person asked to remain anonymous to protect their family’s privacy. 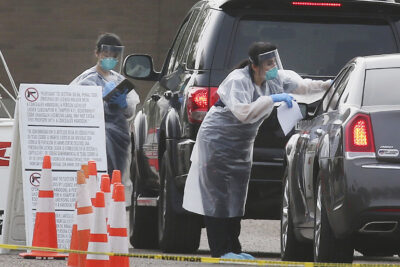 The agency has not publicly acknowledged the death of an employee from the Tuba City Boarding School, about three hours north of Phoenix, who died Thursday after testing positive for COVID-19, a relative confirmed.

At Rocky Ridge, text messages obtained by the Republic show that the school told employees that they were not authorized to speak publicly and announced an internal investigation into how news of the infection leaked to the Navajo Times.

And at the Kaibeto Boarding School, near the Utah border, two employees tested positive for COVID-19, and three more are quarantined and awaiting test results, said Bahozhoi Kinsel, who is president of the advisory school board.

“They’re trying to keep it under wraps,” Kinsel said of BIE.

The advisory board, which is elected but wields almost no power over the school, sent Dearman, the BIE’s director, a letter on March 30, accusing the agency of endangering the school’s staff and students because a permanent closure had not yet been announced.

By Friday, Kinsel said that BIE had agreed to close Kaibeto. A letter posted to the school’s Facebook page indicated that all BIE schools would remain closed until further notice. The agency has not confirmed that decision.

“We told them what to do, and they didn’t listen,” Kinsel said. “Now look what’s happening.”