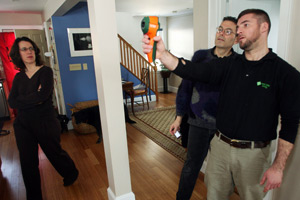 Much of Indiana's federal weatherization money is funneling through a startup with no experience in such programs, drawing fire from citizen activists. The Journal Gazette in Fort Wayne reports that the Indiana Builders Association will receive nearly half of the $132 million in stimulus money to weatherize more than 30,000 homes. Critics say the politically active group has made campaign contributions to Gov. Mitch Daniels.

A $128 million stimulus grant for highway work in Southern California's Inland Empire is testing whether a major infrastructure project can revitalize a region battered by the recession, reports The Wall Street Journal. "It's probably just a drop in the bucket, but right now we're happy to take whatever we can get," a car dealership owner tells the Journal. "We're flat broke out here. We need it."

And finally, much of the stimulus money that has been directed toward crime fighting has gone toward police, not victims. But as private and state funding for victims' programs declines, stimulus money is helping some programs stay alive and retain staff, reports the Associated Press. Some $225 million in stimulus money is going toward programs dealing with violence against women and $100 million more to help other crime victims.