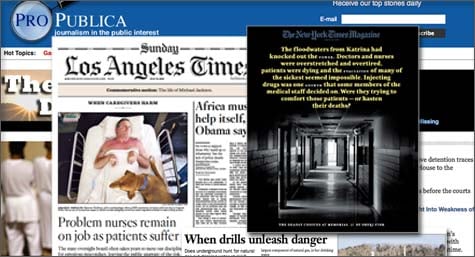 It’s that time of year — the time when many people consider last-minute charitable contributions.

In that spirit, we wanted to take a moment to ask that those readers fortunate enough to be able to do so think about including ProPublica on your year-end list.

Donate now via our secure Web form. All contributions are tax deductible.

Here are five stories that wouldn’t have happened without ProPublica — five reasons why we need your support:

• The untold stories of New Orleans in the wake of Hurricane Katrina: a gripping and painstaking account of the aftermath at one New Orleans hospital, published in partnership with The New York Times, and a separate five-part series on police violence, published with The Times-Picayune of New Orleans.

• More than 10 articles in partnership with the Los Angeles Times detailing enormous problems in California’s oversight of nurses and other health professionals — and triggering major reform of those systems. The day after one of our stories was published, Gov. Arnold Schwarzenegger cleaned house and fired most of the nurses’ oversight board.

• Daily stimulus coverage that has come to be widely regarded as definitive, including stories in partnership with USA Today, the CBS Evening News, WNYC radio, MSNBC.com, the Huffington Post, Salon and MinnPost — as well as the creation of a ProPublica Reporting Network, our 2,800-strong army of volunteer reporters.

• Our agenda-setting series on the environmental risks of "hydrofracking," a method of natural gas drilling. More than 40 such stories from ProPublica were published this year, with our reporting featured in newspapers in New York, Colorado and Pennsylvania, and on Politico and Salon.

• A series of articles on how military contractors in Afghanistan and Iraq had become the war’s hidden casualties — until ProPublica told their stories, prompting congressional hearings and reform proposals from the Departments of Labor and Defense.

Your donations keep our reporters focusing on tough stories like these that take a big commitment in time and resources.

If you prefer not to donate over the Internet, you can also send your check to: ProPublica, 55 Broadway, 23rd floor, New York, NY 10006.

So if you can afford to join us in this work, we thank you in advance for your donation. In any event, we thank you also for caring about the kinds of stories we do, for sharing them with your friends and colleagues, and for giving us the gift that journalists value above all others: the gift of a reader’s time. Happy New Year from ProPublica.