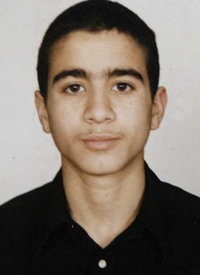 The U.S.'s first war crimes tribunal since World War II is now history, with quite mixed results for the government. As Carol Rosenberg reports in today's Miami Herald, the next case is about to get started -- and if anything, it could prove to be even more problematic for the government.

Pre-trial hearings at Guantanamo Bay will begin today for Omar Khadr, who is facing charges (PDF) for allegedly throwing a grenade and killing a GI during a battle in Afghanistan in 2002. Khadr was 15 years old at the time. And as the Miami Herald points out, Khadr's lawyers plan to argue among other things that he's protected from prosecution under a "so-called Child Soldier defense." According to Khadr's lawyers, Khadr, who is a Canadian citizen, would be the first underage soldier ever prosecuted for a war crime.

Another issue likely to be explored during the trial is Khadr's treatment by interrogators. During the firefight with U.S. forces, Khadr was shot in the chest. After he was captured, he was held for a few months at Bagram Air Base. There has long been evidence of abuse during 2002 and 2003 at Bagram, where at least two detainees were killed. (The previous war crimes tribunal, of Salim Hamdan, excluded statements Hamdan made while at Bagram. The judge said Hamdan's treatment there had been "highly coercive.")

According to a detailed piece in Rolling Stone, Khadr was also mistreated at Bagram, including being put in "stress positions":

He was repeatedly brought into interrogation rooms on stretchers, in great pain. Pain medication was withheld, apparently to induce cooperation. He was ordered to clean floors on his hands and knees while his wounds were still wet. When he could walk again, he was forced to stand for hours at a time with his hands tied above a door frame. Interrogators put a bag over his head and held him still while attack dogs leapt at his chest. Sometimes he was kept chained in an interrogation room for so long he urinated on himself.

One of Khadr's interrogators at Bagram, Sgt. Joshua Claus, later pleaded guilty for his role in the infamous death of another detainee, a taxi driver named Dilawar. Claus has denied abusing Khadr. Khadr was transferred to Gitmo in late 2002, where his initial treatment may have been even worse.