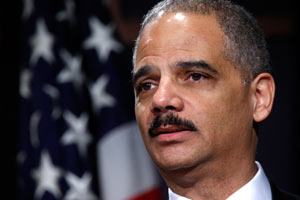 The five-page letter (PDF) that U.S. Attorney General Eric Holder issued this week defending the decision to treat the Christmas Day bomber suspect as a criminal suspect, rather than as a wartime captive, offered new insight into the Obama administration's view of the limits of preventive detention.

The letter suggests that the administration sees virtually no legal foundation for holding terrorism suspects arrested on U.S. soil in preventive detention and has very little interest in trying to create any.

He didn't confine his reasoning to the specifics of Umar Farouk Abdulmutallab's case, but instead offered an overarching view of the current state of the law.

"Some have argued that had Abdulmutallab been declared an enemy combatant, the government could have held him indefinitely without providing him access to an attorney," Holder wrote. "But the government's legal authority to do so is far from clear."

Holder suggested that the administration would need to see a "court-approved system" for domestic military detentions to conclude that it did have the authority.

The letter was sent to a group of senators who included such leading advocates for a legislatively created preventive detention system as Lindsey Graham, R-S.C. The senators were outraged that Abdulmutallab was given access to a lawyer and is being prosecuted in a civilian court, rather than being treated as a military prisoner.

Holder acknowledged that a 2008 federal appeals court decision said the president had the authority to put an al-Qaida suspect arrested in the United States into military detention as part of the post-9/11 wartime response. In that case, Ali Saleh Kahlah al-Marri, a legal U.S. resident but not a citizen, was arrested in December 2001 in Peoria, Ill., and held for nearly six years in isolation as an enemy combatant. After protracted litigation he was permitted to challenge his military detention in federal court. A lawyer represented him in that unsuccessful habeas challenge, but wasn't present while he was being interrogated in military custody -- the issue critics of the administration have been exercised about in Abdulmutallab's case.

The Supreme Court agreed to review al-Marri's case last year, but vacated the appeals court decision after the Obama Justice Department sought to transfer him to civilian custody. He was later successfully prosecuted him in the criminal justice system.

The Bush administration had touted the al-Marri decision as a vindication of the president's detention power, and Abdulmutallab's case resembles al-Marri's in certain ways. He was arrested on U.S. soil, in Detroit, after allegedly trying to blow up a jet carrying nearly 300 people on Dec. 25, 2009. He is suspected of having trained with al-Qaida, and he is a citizen of Nigeria, not of the United States.

Holder in his letter characterized the al-Marri case as having "raised serious statutory and constitutional questions in the courts concerning the lawfulness of the government's actions."

Still, Holder didn't explicitly say never to domestic military detentions. Legal scholars speculate that there may be some scenarios -- perhaps involving an emergency capture based solely on foreign intelligence too sensitive to use in court -- that would require a president to go the al-Marri route or set a suspect free.

Correction, Feb. 7, 2010: The original version of this story incorrectly stated that the al-Marri decision in the Court of Appeals still stands. In fact, the Supreme Court vacated the decision, thus depriving it of value as a legal precedent.