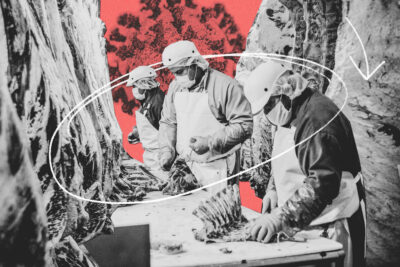 Series: On the Line

How the Meatpacking Industry Became a Hotbed of COVID-19

A key congressional panel launched an investigation this week into the wave of COVID-19 infections that killed hundreds of workers at meatpacking plants nationwide last year and highlighted longstanding hazards in the industry.

Since the start of the pandemic, the meat industry has struggled to contain the virus in its facilities, and plants in Iowa, South Dakota and Kansas have endured some of the biggest workplace outbreaks in the country.

The meat companies’ employees, many of them immigrants and refugees, slice pig bellies or cut up chicken carcasses in close quarters. Many of them don’t speak English and aren’t granted paid sick leave. To date, more than 50,000 meatpacking workers have been infected and at least 250 have died, according to a ProPublica tally.

The congressional investigation, opened by the House Select Subcommittee on the Coronavirus Crisis, will examine the role of JBS, Smithfield Foods and Tyson Foods, three of the nation’s largest meat companies, which, the subcommittee said, had “refused to take basic precautions to protect their workers” and had “shown a callous disregard for workers’ health.”

The subcommittee is chaired by Rep. James E. Clyburn of South Carolina, the No. 3 Democrat in the House.

In response to the subcommittee's announcement, officials for JBS and Tyson said that the companies had spent hundreds of millions of dollars to implement coronavirus protections and to temporarily increase pay and benefits, and they looked forward to discussing their pandemic safety efforts with the panel. Smithfield said in a statement that it had also taken “extraordinary measures” to protect employees from the virus, spending more than $700 million on workplace modifications, testing and equipment.

The House subcommittee noted that reports from a variety of news organizations had illuminated problems with how the meatpacking companies handled the pandemic, and with the Occupational Safety and Health Administration’s enforcement efforts. The subcommittee cited ProPublica’s reporting on how meat companies blindsided local public health departments, and on Nebraska Gov. Pete Ricketts’ efforts to intervene when local health officials tried to temporarily shutter a JBS plant amid an outbreak.

ProPublica has also documented how meat companies ignored years of warnings from the federal government about how a pandemic could tear through a food processing facility, and chronicled the role that meatpacking plants like a Tyson pork facility in Waterloo, Iowa, have played in spreading the virus to the surrounding community.

The subcommittee’s inquiry will also scrutinize the federal government’s shortcomings in protecting meatpacking workers. “Public reports indicate that under the Trump Administration, the Occupational Safety and Health Administration (OSHA) failed to adequately carry out its responsibility for enforcing worker safety laws at meatpacking plants across the country, resulting in preventable infections and deaths,” according to the subcommittee's letter to OSHA.

The subcommittee also said that the agency had issued only a “few meager fines” and “failed to show urgency in addressing safety hazards at the meatpacking facilities it inspected.” The letter noted that OSHA had received complaints about JBS and Smithfield plants months before the agency conducted inspections. 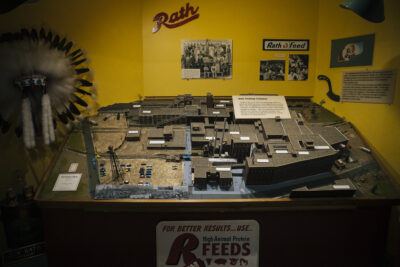 David Seligman, a lawyer who helped meatpacking workers in Pennsylvania file a lawsuit against OSHA during the pandemic, said he hopes the subcommittee’s efforts are “just one of the initial steps” to holding companies accountable and ensuring workers are safe. “The harm inflicted on meat-processing workers during this pandemic, in service of the profits of corporate meat-packing companies and under a government that seemed happy to turn a blind eye, is a grave scandal,” Seligman wrote in an email.

In a statement, a Department of Labor spokesperson said that the subcommittee’s inquiry is “focused on the Trump administration’s actions surrounding the protection of workers from COVID-19 related risks,” and the agency is committed to protecting workers, and that new guidance on coronavirus enforcement that was issued in late January will serve as a “first step.”

In its Feb. 1 letters to OSHA, JBS, Tyson and Smithfield, the subcommittee has requested documents related to government inspections at meatpacking plants and COVID-19 complaints lodged with the companies. OSHA was asked to brief the subcommittee by Feb. 15.

Do you have access to information that should be public about how regulatory agencies have responded to the pandemic? Email [email protected] and [email protected]. Here’s how to send tips and documents to ProPublica securely.