This story was co-published with the Columbia Journalism Review. 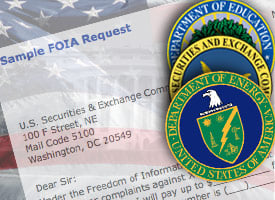 As one of the most secretive presidential administrations in history gets ready to close up shop, it's closing a few more things -- records. Over the past few months, some federal agencies have issued rules that would eliminate public disclosure of information -- or, in some cases, make it more difficult for requesters to get information.

While the federal Freedom of Information Act regulates what government information may be withheld from the public, internal rules determine how that law is carried out at the agency level. Those rules also may restrict access to information.

On Dec. 9, the Department of Energy proposed a rule that would eliminate the agency's "public interest balancing test" in determining whether to release information to the public. That test allowed the agency to release documents that would otherwise be exempt from disclosure if, in their opinion, releasing them would serve the public interest. According to the agency's summary of the rule, the test imposed "an additional burden on DOE." The agency also increased the photocopying fee paid by FOIA requesters to 20 cents per page. The agency currently charges five cents for copies of paper documents and 10 cents per page for printouts of microfilm. Getting in a final rule before the Obama administration takes over would be a stretch. DOE is accepting public comments on the proposed rule until Jan. 8. But the agency might be able to put a final rule in place before FOIA guidance is issued by the new U.S. Attorney General.

Other agencies also upped the fees they can charge for public records. The Securities and Exchange Commission, the federal agency charged with protecting investors, proposed a rule Dec. 23 that would bump fees for processing records at a time when easy access to information about companies is crucial to the public. Hourly fees for processing increased for every employee seniority level. The new rule would bump the lowest category to $26 per hour from $16. The highest level would go from $28 per hour to as high as $70 per hour.

The Family Educational Rights and Privacy Act, the privacy law that protects information that identifies students, will broaden starting Jan. 9 under a final rule of the Department of Education. According to the Student Press Law Center, the proposed rule said that records would remain confidential if a student's identity could be determined by people outside the school, but "the final regulation says that a redacted record is confidential if a person's identity could be determined by people in the school.”

In its rule, the agency provides the example of a high school student being suspended for bringing a gun to class. That information could not be disclosed, because someone in the school likely knew the identity of the student -- thus making it almost impossible for someone outside the school to get that information. So no one in the community would ever have that information.

The new FERPA rules likely will affect access to test scores, which already are restricted when demographic characteristics might allow someone to determine a student's identity.

The administration's last-minute move to close off information isn't surprising, said Lucy Dalglish, executive director of The Reporters Committee for Freedom of the Press. "They've been doing it all along."

The October 2001 FOIA memorandum issued by then-Attorney General John Ashcroft set the tone of withholding information whenever possible. The memo encouraged federal agencies to withhold information if they could justify it.

Federal Energy Regulatory Commission guidelines adopted in April 2003 protected "critical energy infrastructure information" from disclosure. The changes allowed FERC to limit access to information that "could be useful to persons in planning an attack on critical infrastructure" and are "exempt from mandatory disclosure under the FOI Act."

The rule created a parallel information distribution system based on its own determinations of "need-to-know." Requesters whom the agency decided need to know information were required to sign non-disclosure agreements limiting their ability to share the information.

A December 2006 EPA rule reduced the amount of pollution information reported under its Toxics Release Inventory Program. Previously, companies that released less than 500 pounds of certain substances did not have to report details about what they released. The 2006 rule bumped that amount tenfold, allowing companies to release up to 5,000 pounds before filing detailed information.

When it proposed the new rules, the EPA said the new reporting guidelines would represent only a small portion of the total chemicals reported to the public.

But a Government Accountability Office report (PDF) released in November 2007 found that more than 3,500 facilities nationwide would no longer be required to report detailed information about their toxic releases.

Reversing these rules will be a huge task for the new administration, Dalglish said. But this reversal should start on day one: "Saying in his inaugural speech that this will be the most open and transparent government in history will make it easier for agencies to come in and do it."