More than two dozen international health and development agencies have called for reforms in aid provision to prevent long-term damage to the health systems of developing countries. The announcement came two weeks ago at the annual meeting of the Global Health Council in Washington, D.C. Signatories of the new, entirely voluntary, code of conduct include the American Public Health Association, the world's oldest and largest association of public health professionals, and Partners in Health, a group co-founded by prominent Harvard professor and social activist Dr. Paul Farmer. 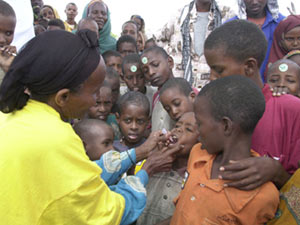 The code urges aid agencies to refrain from creating "internal brain drain" by hiring scarce government employees, such as doctors and nurses, away from the public sector in the very countries the groups are trying to help. The existence of tens of thousands of unregulated non-governmental aid agencies, each with a unique approach to providing assistance, has also burdened government health managers in poor countries and contributed to health care inequities, organization leaders say.

In recent years, aid agencies, donors and international organizations have initiated several other voluntary efforts to improve the quality and impact of aid, including the Sphere Project and the Paris Declaration on aid effectiveness. These efforts -- the latest of which focuses exclusively on preventing harm to developing country health systems -- reflect the burgeoning opinion that good intentions to help those less fortunate are not good enough. "We strongly believe in self-regulation," said Dr. Daraus Bukenya, director of community programs in Kenya for the medical aid agency AMREF.

Still, whether voluntary initiatives carry enough weight to promote accountability remains unclear. Leaders admit that even agencies that have signed the code have far to go to comply with it. We attended the announcement and asked some of the leaders whether practices would change with the adoption of the new standards.  "[The code] brings these issues to light so we can talk about them and debate them," said Dr. Wendy Johnson of Health Alliance International. In Mozambique, where several hundred physicians serve a population of approximately 21 million, "it's difficult to do the work and not hire local people," Johnson said. "It's very difficult to strike that balance."