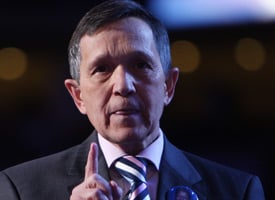 Rep. Dennis Kucinich, D-Ohio, announced today that a panel of the House Committee on Oversight and Government Reform will hold a hearing on June 18 to examine whether AIG and other major insurance carriers have inappropriately denied medical claims of contractors injured on the job in Iraq and Afghanistan.

Kucinich, the chairman of the Domestic Policy Subcommittee, said earlier that he was "alarmed" by a joint investigation by ProPublica, ABC News and the Los Angeles Times, which found that the troubled insurance giant routinely denied medical care to civilians injured in the war zones. Rep. Elijah Cummings, D-Md., first requested a hearing after the reports aired earlier this year.

Kucinich's panel will be joined by Sen. Bernie Sanders, I-Vt., who has also expressed concern over the billion-dollar government-funded system to care for injured civilians. Sanders had planned to hold hearings in the Senate but decided instead to join Kucinich's panel because the Senate health and labor committee has a heavy schedule of health care reform hearings this summer.

Under a federal law known as the Defense Base Act, contractor companies are required to purchase workers’ compensation insurance for employees deployed to a war zone. AIG dominates the market for such insurance, handling nearly 90 percent of all claims in Iraq. Government audits and inquiries have questioned whether AIG and other carriers charged "excessive" premiums for the insurance. Taxpayers ultimately pay for such insurance as part of the contract price.

"The hearing will explore ways to increase oversight and improve the [Defense Base Act] workers' compensation program in order to enhance protections afforded to injured civilian contractors," according to a release (PDF) from the subcommittee, which oversees labor issues.

Injured civilian workers, representatives from AIG and other carriers, and officials with the Labor Department, which oversees the program, are expected to testify. AIG has said it would "fully cooperate" with requests for documentation from the committee. The company maintains that the "vast majority" of claims are paid without dispute "when the proper supporting medical evidence has been received."