This story was originally published by the Los Angeles Times and ABC News. 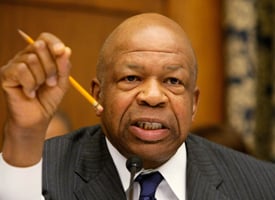 Reporting from Washington -- A senior member of the House Committee on Oversight and Government Reform wants his panel to investigate whether insurance giant American International Group Inc. and other providers have unnecessarily denied and delayed costly medical treatment for civilian contractors injured in Iraq and Afghanistan.

Rep. Elijah E. Cummings (D-Md.) also called for an investigation into the Labor Department's role in overseeing the federally financed insurance system for civilians working overseas. Cummings made his case for the inquiries in a letter Tuesday to Rep. Dennis J. Kucinich (D-Ohio), chairman of the subcommittee on domestic policy.

The letter cited media reports last week disclosing that insurance companies routinely challenged serious injury claims of civilian workers returning from the war zones. Private contractors have been forced to battle for basic medical needs such as artificial limbs, surgery and psychological counseling, according to investigative accounts published jointly by the Los Angeles Times and ProPublica and broadcast by ABC News.

"The men and women who sacrifice their lives to protect our nation on the battlefield should be able to return to their families without having to wage another battle here at home to receive the healthcare they are more than entitled to receive," Cummings said. "I was absolutely disgusted to read about the atrocities that individuals are being forced to endure as they attempt to get treatment for the injuries they received while serving our country."

In a statement Tuesday, AIG said it paid the "vast majority" of claims without dispute. Labor Department officials said they had done their best to police the system with limited resources.

The controversy surrounds the Defense Base Act, which requires federal contractors to purchase workers' compensation insurance for civilians working overseas.

Once an obscure corner of the federal bureaucracy, claims have soared from a few hundred a year to more than 11,000 in 2007. The increase is a direct result of the privatization of the wars in Iraq and Afghanistan, where civilian contractors outnumber troops in the battle zones. More than 1,400 contractors have died in Iraq and 31,000 have reported injuries.

AIG is the dominant workers' compensation provider, handling nearly 90 percent of all claims filed by injured civilians or by the families of dead contractors. Congressional investigators have previously questioned the cost of the company's premiums, which are paid by taxpayers as part of the price of a federal contract.

Last year, the government reform committee determined that AIG had collected $1.3 billion in premiums on the insurance between 2002 and 2007, while it had paid out about $800 million -- leaving the company with a nearly 40 percent profit. The Pentagon has recently begun an inquiry into whether such premiums can be lowered.

Analysis of Labor Department data found that insurers had denied about 44 percent of all serious injury claims -- those involving more than four days of lost work. The companies also turned down about 60 percent of contractors who claimed to suffer psychological damage such as post-traumatic stress disorder. The Times sued the government for access to Labor Department records.

"There are clearly serious deficiencies in the health coverage of civilian employees who have been injured while working overseas to keep us safe here at home -- costing not only the men and women who are being refused coverage for the treatment they need, but also for the American taxpayers who are footing the bill for their coverage," Cummings said.