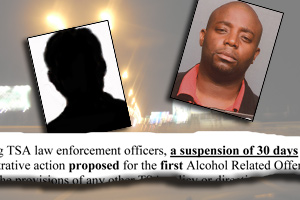 Federal air marshals arrested on drunken-driving charges will face a 30-day suspension without pay under a new policy (PDF) from the Transportation Security Administration.

The penalty replaces a policy in which air marshals convicted of drunken driving could be punished with a letter of reprimand, one of the lowest penalties.

The new policy comes after a report by ProPublica found that more than 40 air marshals had been charged with crimes since the agency expanded after the Sept. 11, 2001, terrorist attacks. The report appeared in Nov. 13 editions of USA Today.

Robert Bray, director of the Federal Air Marshal Service, said the tougher penalty is a way to implement "a culture of accountability" in the agency.

"We've had pretty strong feedback" from the rank and file, he said. "They feel as professionally and personally embarrassed by these actions as I do, and they want these people dealt with."

Under the policy, a 30-day suspension is mandatory for any "alcohol-related offense," a broad category that includes a police report of driving under the influence, refusing a sobriety test, an arrest or a conviction.

The minimum 30-day suspension puts the air marshals in line with other federal law enforcement agencies, including the FBI. It took effect Friday.

Between 3,000 and 4,000 armed air marshals fly undercover on U.S. flights to protect against possible terrorist attacks. The official number is classified.

At least nine air marshals have been convicted of drunken driving and remained on the job, according to a Transportation Security Administration memo obtained by ProPublica.

A group that lobbies on behalf of federal officers agreed with the change in policy.

"We're out there to protect the families of the American public -- not endanger them with drunk driving," said Frank Terreri, an air marshal and representative with the Federal Law Enforcement Officers Association. "We were honestly surprised that it was as lenient as it was."

Rep. Ted Poe, R-Texas, who grilled TSA officials about drunken-driving incidents at a congressional hearing, said that he is encouraged by the stricter penalties but that air marshals convicted of driving drunk should be fired. "Their job is too important to get a conviction for drunken driving," Poe said.