Alhurra, the U.S. government-funded Arabic news channel, paid former Bush and Clinton administration officials, lobbyists and high-profile Washington journalists tens of thousands of dollars in U.S. taxpayer money to appear on the network as commentators, according to interviews and a review of company records. 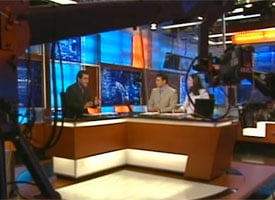 A number of payments went to people tied to the White House and the Republican Party. Chad Kolton, a former spokesman for the Director of National Intelligence and Federal Emergency Management Agency; Trent Duffy, President Bush’s former deputy press secretary; Jennifer Millerwise Dyck, a former aid to Vice President Cheney and former CIA spokeswoman, and Terry Holt, the spokesman for Bush-Cheney 2004, were among those paid to appear.

Alhurra, a 24-hour satellite station, was founded by the Bush administration four years ago to project a positive image of the United States to Middle East viewers. Despite lagging ratings, management shake-ups and incomplete financial records, Alhurra’s budget has nearly doubled to $112 million since it went on air in 2004.

Alhurra was the subject of a joint investigation by ProPublica and CBS News’ 60 Minutes. The network and its sister radio station, Sawa, have aired anti-American and anti-Israeli viewpoints, have showcased pro-Iranian policies and recently gave air time to a militant who called for the death of American soldiers in Iraq. The investigative report, broadcast Sunday on 60 Minutes and detailed on ProPublica, also described years of concerns raised by State Department officials and by current and former employees regarding the network’s content, the quality of its staff, and a lack of government oversight. The Washington Post examined Alhurra's image in the Middle East in a feature story Monday. The reports sparked a call from Rep. Ileana Ros-Lehtinen (R-FL) for a congressional investigation of Alhurra.

As part of its continuing investigation of Alhurra, ProPublica has reviewed rosters of guests who appeared on the network in the first six months of 2008. During that period, Alhurra spent $108,000 on guest fees for its news programs, according to a review of documents detailing the expenses. The network paid tens of thousands of dollars more for private car services to ferry guests to studio appearances in Springfield, Va. Alhurra has a separate budget for guest appearances for talk shows and current affairs programs, according to several individuals with knowledge of the appearances.

A number of well-known Democratic strategists and policy analysts were among those paid for appearing on Alhurra news programs. Doug Schoen, the Democratic pollster and former advisor to President Clinton, earned a total of $1,050 for three appearances in January. Steve Murphy, who worked for former Democratic Congressman Richard Gephardt of Missouri, earned $5,500 for nine appearances during the primary season.

Thomas Donnelly, of the conservative American Enterprise Institute, was the highest-paid news guest, earning $10,300 for eight lengthy appearances between January and April to comment on the U.S. elections. Donnelly said he spent at least three hours on air during each appearance.

“I think it was a useful thing to do. If there was anything that was going to show off the competitive and participatory nature of an American democracy, it was the Democratic primaries,” he said. “And it was interesting to explain to Middle Eastern audiences how a guy named Barack Hussein Obama might be President of the United States.”

Donnelly said he was often on the air with Edward Joseph, a Democrat who is a fellow at the Foreign Policy Institute at Johns Hopkins University. Joseph was the second highest paid guest on Alhurra. He received $7,700, also for eight appearances.

Alhurra spokeswoman Deirdre Kline did not respond to inquiries regarding the network’s policies on honorariums.

Although it is common for television networks to pay journalists who appear on their programs, many reporters decline to accept money from government-funded organizations. Still, a number of veteran Washington reporters earned hundreds of dollars for appearing on Alhurra and some said they saw no conflict of interest in accepting government funds.

Kondracke, of Roll Call, a Washington paper that covers Congress, received $1,600 in government funds for two appearances earlier this year. Kondrake said through his assistant that he knew of no policy that prevented him from accepting fees from Alhurra.

Roll Call editor Charlie Mitchell said in an e-mail he did not see a conflict.

“Mort clearly was not taking an editorial position for the newspaper but was speaking as a syndicated columnist and recognized expert on U.S. politics and policy. Our policy on freelancing is that employees may do so on their own time. We expect them to live up to Roll Call's standards of objectivity but otherwise we don't screen their appearances.”

Kelly McBride, a specialist on media ethics at the Poynter Institute, a professional journalism center in St. Petersburg, Fla., said reporters damage their ability to be objective when they accept government money.

“Roll Call is supposed to objectively cover Congress, and Alhurra is funded by Congress. You wouldn’t let a reporter take money from a clearly partisan group. The same standard should apply to taking money from an operation set up by the government to influence opinion.”

David Corn of the liberal magazine Mother Jones received $1,300 from Alhurra and said he saw no conflict. “I don’t think anyone can accuse me of going soft on the U.S. government,” said Corn, co-author of Hubris, a book that sharply criticized the Bush administration’s Iraq war plans.

Still, Eddie Scher, a spokesman for Mother Jones, said the magazine was updating its ethics policies and would not support further paid appearances by Corn or other employees on Alhurra.

Other paid reporters included Washington Times reporters Bill Gertz, who received $600, and Joe Curl, who earned $750 for appearances this year. Gertz did not respond to a call for comment. Curl has not yet responded to a request for comment.

John Solomon, who was named executive editor of The Washington Times earlier this year, put a newsroom “code of conduct” into effect two weeks ago that prohibits employees from accepting money from the government. When his reporters appeared on air, “there were no conflict of interest rules in the newsroom at all,” Solomon said.

Washington Examiner reporter Bill Sammon did not respond to calls about his relationship with Alhurra.

On Jan. 12, Sammon published a brief interview with Alhurra employee Julie Zann. Zann was identified by Sammon as a producer; her job is to book guests for the network’s news programs. On Jan. 15, three days after Sammon’s article was published, he appeared on Alhurra to discuss the Michigan primary and received $500 from the station. He also received a $1,500 payment from Alhurra two weeks later for a Jan. 28 appearance to discuss President Bush’s State of the Union speech. The Examiner did not respond to a request for comment.

Alhurra also paid small fees to reporters from the Des Moines Register, the Texas Monthly, Politico, the Israeli newspaper Haaretz and the Financial Times of London.

Amity Shlaes, who writes opinion columns for Bloomberg news, was paid $300 to discuss U.S. stock markets. Alhurra identified Shlaes in financial records as a Bloomberg reporter, but she said she appeared in her capacity as a senior fellow at the Council on Foreign Relations, where she works.

Harlan Ullman, considered the architect of the military’s “shock and awe” doctrine which guided planning for the 2003 invasion of Iraq, earned $1,500 in fees for commenting on the primary races.

Barbara Comstock, a Republican lobbyist who was a consultant to the presidential campaign of former Mass. Gov. Mitt Romney, earned $2,400 for appearances in February, March and April.

Georgette Mosbacher, the Republican fundraiser and New York socialite who co-chaired John McCain’s 2000 bid for the presidency, was paid $500 to comment on the New Hampshire primary race.

Update: Bill Gertz of the Washington Times responds: "All aspects of my appearances were approved in advance by senior editors and therefore were in compliance with newsroom policy at the time. The Times recently put in place new rules that would restrict such appearances in the future."

Update/Correction: This post originally stated that Amity Shlaes received $500 for an appearance on Alhurra. She received $300.

July 21 Update: The Washington Examiner responded to this story today with a comment from executive editor Stephen Smith: "we expect members of our staff to not accept remuneration for activities that would in any way compromise their work or even create an appearance of a conflict of interest.

"We've only had one case in which one of our reporters accepted an honorarium that we thought might create an appearance of a conflict and we immediately directed the reporter to not accept honoraria of that nature."

The paper did not identify the reporter.

Correction, June 24, 2008: This article misstated the amount Amity Shlaes received $500 for an appearance on Alhurra. She received $300.