After at least three complaints alleging lax reopening practices at West Virginia Gov. Jim Justice’s luxury resort hotel, a kitchen employee has tested positive for the coronavirus at a residential and sports club affiliated with The Greenbrier.

Local Health Department officials directed a 14-day quarantine for potentially exposed employees at The Lodge, a restaurant at the Greenbrier Sporting Club, and the venue will remain closed until July 10. Festivities planned at the club for July 4 will go on, but with food from other facilities.

"While the events of the past few days certainly have thrown us a curve ball, we have reached out to our friends and colleagues in the area to pull together a festival that will have something for everyone," the director of operations at the sporting club, Allen Wills, told its 400 members in a Tuesday night email, obtained by ProPublica.

Justice has not commented on the positive case at the club, which like The Greenbrier resort is owned by the governor and his family. Last week, Justice ousted the state’s health director, and this week, he contended that the state had been overreporting the number of active COVID-19 cases.

Allison Adler, spokeswoman for the state Department of Health and Human Resources, said the agency learned of the positive test at the sporting club on Saturday. She said the Greenbrier County Health Department is managing the response and referred questions to that local agency.

“Since this is limited to one individual, it is not considered an outbreak, therefore, DHHR does not have a specific role,” Adler said in an email.

The employee who tested positive worked in the kitchen at the Lodge. Described as the “social hub” of the sporting club, it looks out over the 18th hole at a course named for golf legend Sam Snead and offers views of the sunsets behind the White Rock and Greenbrier mountains.

The private, members-only sporting club is open to those who buy homes that are located near the resort and that come with not only access to the historic hotel, but other, exclusive amenities, including a golf course, fly-fishing, restaurants and a pool.

On its website, the sporting club posted a detailed set of dining guidelines that includes social distancing, use of disposal containers and a caution against greeting anyone by shaking hands or hugging.

Club officials first disclosed the positive COVID-19 test of an employee to club members on Saturday, just days after ProPublica reported on complaints filed with local health officials that The Greenbrier wasn’t reopening safely following a two-month closure because of the pandemic. State and local health officials responded that safety guidance was mostly voluntary, but county inspectors reminded The Greenbrier to follow the state’s recommendations. Justice’s reelection campaign alleged a ProPublica reporter was “working to manufacture more smears against Governor Justice.”

The same day as that ProPublica report, Justice forced out Dr. Cathy Slemp, the commissioner of the state Bureau for Public Health. The governor said there were a “multitude” of reasons for the move but cited only one: State figures for some counties had not in a timely fashion moved recovered COVID-19 patients out of the column for “active” cases of the disease. 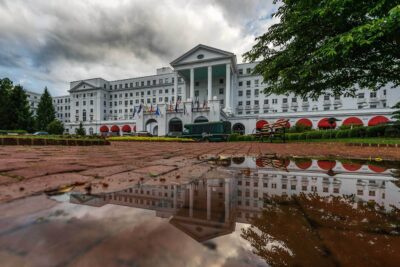 “We are overreporting the sick,” Justice said on Monday. “I am not going to tolerate people who are somewhat asleep at the switch.”

The governor’s action, though, drew an unusual statement of criticism from three top officials at the Johns Hopkins Bloomberg School of Public Health, where Slemp earned her master’s degree.

In his Tuesday night note to members, Wills said that club officials "continue to take COVID-19 very seriously" and adhere to all "federal, state and local guidelines and procedures."

"We strongly encourage our members and their guests to wear masks whenever social distancing is not possible and follow the guidelines established for each area of the club in order to assist with the effort," Wills wrote. "As always, we appreciate your continued outpouring of support as we move through this unprecedented time."

Update, July 1, 2020: Asked about this story Wednesday during a media briefing, Gov. Jim Justice said that The Greenbrier “prides itself on doing things right, and they will be following every inch of the protocol in every way.”

The governor said he didn’t know all of the details because, “I’m not involved, or involved almost zero.” When Justice took office in January 2017, he said he put his adult children in charge of his businesses, but the governor has continued to guide the family empire.

Justice said that the audience would be limited and social distancing guidelines would be followed at the resort when World TeamTennis plays its three-week season there starting July 12.

“So everybody is doing, for the most part, about everything that we can do,” the governor said.