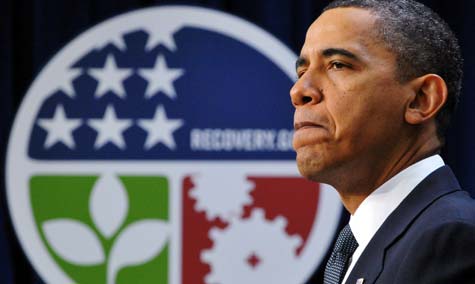 A year ago, Congress passed one of the biggest-ever attempts to spend the United States out of an economic maelstrom. The American Recovery and Reinvestment Act stands as one of President Obama’s signature initiatives — a mix of tax cuts, financial aid and infrastructure projects worth some $800 billion.

Has the stimulus lived up to its promise? As we’ve reported before, where you stand depends on where you sit.

The White House is marking today’s anniversary with a stimulus progress report (PDF), which claims the Recovery Act has created or saved 2 million jobs; extended unemployment benefits for almost 20 million Americans; and cut taxes for more than 95 percent of working families. The administration says that by the end of last month, the combination of tax cuts and obligated funds came to a total of $453 billion.

"The work that you set us out to do a year ago is going well," Vice President Joe Biden writes in his cover letter to the president. "I believe that we have served the American people well."

You won’t be surprised to hear that Republicans feel differently. House GOP Leader John Boehner of Ohio issued a statement yesterday describing the White House’s depiction of the stimulus’s achievements as "hopelessly out of touch with reality." The statement doesn’t challenge any of the actual figures in the administration’s report. Instead, it criticizes the White House for changing its metric for calculating the number of jobs created or saved; points to the "debt piled on the backs of our kids and grandkids;" and calls the overall performance of the stimulus "dismal."

The Wall Street Journal’s lead editorial echoes that view, writing that "instead of spurring recovery, this spending spree has retarded it by frightening the public and business about future tax increases and the rising burden of public debt. The new jobs Democrats promised still haven’t arrived, and while the recovery should finally produce job growth this year, Americans know they have received little for their $862 billion in ‘stimulus.’"

The New York Times’ business columnist David Leonhardt comes to the defense of the stimulus. He writes that criticisms over erroneous spending reports by recipients and slow rates of spending are valid, but adds that "the attention they have received is wildly disproportionate to their importance." Leonhardt argues that the stimulus has left its footprints across the economy, from consumer and corporate spending to public sector jobs, and that the recession would have been worse without it.

Also in contention is whether the Recovery Accountability and Transparency Board has done its job of providing the public with a window into stimulus spending. In his statement, Boehner criticizes the board’s Web site, Recovery.gov, as "discredited," saying it "depicted spending in dozens of phantom congressional districts."

(In November, ProPublica’s Jennifer LaFleur and Michael Grabell reported that the error rates on Recovery.gov weren’t actually that bad compared to many other government databases.)

Susan Collins, the senator from Maine who was one of three Republicans to vote for the stimulus, calls the board’s record "mixed." In a statement to ProPublica, she credited the board for helping put controls in place to prevent wasteful spending, but said that Recovery.gov "has simply failed to provide the level of transparency the American people deserve." Sen. Joe Lieberman, the independent from Connecticut and chairman of the committee on Homeland Security and Governmental Affairs, said in a statement to ProPublica that "while there have been some bumps in the road," the board, along with the Office of Management and Budget, "have made progress towards achieving the transparency called for in the Recovery Act."

Recovery Board Chairman Earl Devaney told ProPublica that the board, "under great time constraints," had established a new independent agency; built new systems to collect and display stimulus spending information; and put in place a system to prevent fraud, waste and abuse. He added that the board has referred 87 cases to individual inspectors general at agencies handling stimulus money.

"Our goal all along has been to improve the public-facing Web site, Recovery.gov, and our overall operation," Devaney said. "By listening to our users and stakeholders, we continue to make changes to how we do business."

We at ProPublica plan to continue digging into the stimulus in the coming year. If you have suggestions for further investigations, let us know.