In a decision last month, the 7th U.S. Circuit Court of Appeals in Chicago has sharply limited a federal law that protects workers who are 40 and older from age bias by ruling that key provisions only apply to those who already have jobs, not those seeking them.

The 8-4 decision, written by Circuit Judge Michael Scudder, a Trump administration appointee, said the “plain language” of the Age Discrimination in Employment Act shows that in enacting the measure, Congress aimed its sweeping prohibition against discrimination at employees but “did not extend that same protection to outside job applicants.”

The ruling prompted a fierce dissent from Circuit Judge David Hamilton, an Obama administration appointee, who accused the majority of taking a “deliberately naïve approach” to the law and “closing its eyes to fifty years of history, context and application.”

The ADEA’s anti-discrimination language originally matched that of the 1964 Civil Rights Act, which covers race, gender, religion and other categories. And for much of the last half-century, federal courts have treated provisions of the two laws as largely interchangeable.

The ruling came in a lawsuit brought by an Illinois lawyer, Dale Kleber, who was 58 in 2014 when he applied for a senior attorney position with CareFusion Corp., a unit of medical device maker Becton Dickinson & Co., but was passed over for an interview. The job eventually went to a 29-year-old candidate.

Kristen Cardillo, a spokeswoman for Becton Dickinson, said in statement the company was “pleased” with the decision. “Fostering an inclusive and diverse culture is at the very heart of our core values,” she said. Lawyers for Kleber said they haven’t decided whether to appeal to the U.S. Supreme Court.

The decision in the Kleber case is the second in which an appeals court has said that the ADEA’s strongest provisions only apply to employees and one in a string of cases since the 1990s that have shrunk what counts as age discrimination, giving employers new leeway to oust or refuse to hire older workers.

A deeply divided 11th U.S. Circuit Court of Appeals in Atlanta ruled in 2016 that executive Richard Villarreal, then 49, had not suffered age discrimination when a subcontractor for R.J. Reynolds Tobacco Co., following Reynolds guidelines, discarded his resume and those of almost 20,000 other older applicants in hiring a regional sales manager. Among other things, Reynolds’ lawyers argued that if the law was read to apply to applicants it could prohibit hiring programs for internships and entry positions aimed at young people and “impose massive litigation costs on employers.”

The majority in the Chicago case cited the Villarreal decision in ruling against Kleber.

Sen. Robert Casey, a Pennsylvania Democrat who’s the ranking member on the Senate Select Committee on Aging, called the new decision “yet another example of the discrimination that older workers face – either on the job or while applying for a job.”

Casey called for strengthening the ADEA.

Dara Smith, a senior attorney with the AARP Foundation who represented Kleber, called the Chicago ruling “very disappointing and frustrating” and said it means that the ADEA is “not particularly useful for older job applicants.”

While she said the law still bans explicit age limits in job postings, she acknowledged the prohibition is weak. The Chicago court rejected Kleber’s argument that the language in CareFusion’s job ad, which asked for applicants to have “no more than 7 years” experience, effectively ruled out older workers like him from applying.

Under the law, older applicants and employees can still prevail if they can prove employers intentionally discriminated against them. But in a 2009 decision, the Supreme Court set a higher bar for proving intentional age bias than for any other type of legally prohibited discrimination, saying that age must be the sole reason for a worker being unfairly treated.

The issue of whether anti-age discrimination protections cover job applicants has taken on new importance as evidence has mounted that older workers are more apt than generally appreciated to lose longtime jobs and have trouble getting hired for anything like comparable work.

ProPublica and the Urban Institute, a Washington think tank, analyzed data from a government-funded study that since 1992 has followed a nationally representative sample of Americans from the time they turn 50 through the rest of their lives.

The analysis, published in December, showed that between entering the study and leaving paid employment, 56 percent of older workers were laid off or left longtime jobs under such financially damaging circumstances it’s likely they were forced out. Only one in 10 of these workers ever again earns as much as they did before their employment setback.

In both the Chicago and Atlanta cases, the decisions that federal anti-age bias protections don’t apply to job applicants prompted sharply worded dissents.

The dissenters argued that drawing a line between employees and job applicants ignores the intent of the legislators who wrote and enacted the ADEA. “In simple terms,” said Ralph Yarborough, a U.S. senator from Texas who was the measure’s chief sponsor, during a hearing, “this bill prohibits discrimination in hiring and firing.”

Hamilton, who wrote the dissent in the Chicago case, said the majority decision “undermines the stated purpose of the statute…to address unfair employment practices that make it harder for older people to find jobs.” 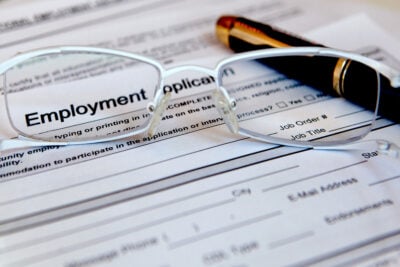