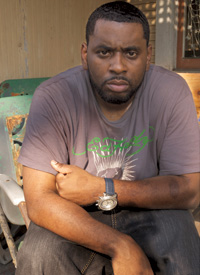 Roughly one month ago the New Orleans Police Department issued a press release (PDF) saying the department was "looking into" allegations of vigilante violence in the wake of Hurricane Katrina in 2005. The NOPD statement was prompted by a ProPublica/Nation investigation, which documented numerous attacks on African Americans by members of a heavily armed militia-type group prowling the Algiers Point neighborhood.

As the story reveals, one of those attacks nearly killed Donnell Herrington, who was shot twice at close range, shredding his jugular vein. Herrington's cousin, Marcel Alexander, said he and a friend were also shot and briefly taken hostage by the gunmen, who called them "niggers" and threatened to tie them up and set them on fire. Additionally, militiamen interviewed for the article described several similar shooting incidents.

So far, however, it seems the NOPD's look at the crimes isn't particularly thorough. NOPD Assistant Superintendent Marlon Defillo, who is handling the probe, said nobody has come forward to volunteer info about the violence. "I have not received one call as of yet," Defillo told us.

The probe, he added, was stalled by a lack of information. "Right now no information is coming in...I just don't have a lot to work with," said Defillo.

But clearly, police detectives haven't done a lot to gather evidence and interview crime victims, witnesses or alleged perps: Defillo asked us to provide him with phone numbers for people quoted in the story. (We didn't do that. It's against our general policy to hand out the contact information of people we've interviewed. We also assume the police have the resources to locate the key figures named in the article if they're so inclined.)

Meanwhile, Herrington said neither he nor Alexander had been contacted by NOPD, and we're not aware of officers interviewing anyone else named in the story.

One person the NOPD has questioned is William Tanner, who was featured in a related ProPublica/Nation story detailing the death of Henry Glover, a 31-year-old father of four.

While Glover's death was officially labeled "unclassified" by the local coroner, Tanner insists the man was murdered -- and that police played a starring role in his demise.

Glover was shot by an unknown assailant shortly after the hurricane struck, on Sept. 2, 2005, according to Tanner and another witness, Edward King. Both witnesses say Glover sought help from a group of NOPD officers who'd commandeered an elementary school, but the cops refused to treat Glover or call for an ambulance, allowing him to bleed to death.

Police then seized Glover's body, say Tanner and King, and drove away with it. The corpse, autopsy records (PDF) and photos show, eventually turned up near an NOPD police station -- it had been severely burned, reduced to little more than ashes and bone fragments.

Another person detectives might want to question is Juanita Stretz, an NOPD officer who worked at the elementary school in the days after the storm. Stretz was one of the officers present when Glover died, said Tanner, who identified her from a photo in an NOPD yearbook.

In an interview, Stretz told us she was assigned to the school during the post-Katrina period but didn’t witness Glover's final moments. "Honestly, I don't know anything about it," Stretz said, adding that "everything was kind of helter-skelter."