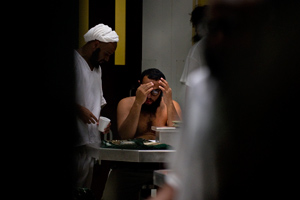 The government is failing in more and more cases to produce evidence that the men it has imprisoned at Guantanamo belong there, according to ProPublica's latest look at the lawsuits that some 100 captives have filed in federal court to seek their freedom. But the Obama administration continues to challenge the courts' authority to make it release the prisoners.

In 34 out of the 47 cases that have been decided so far -- over 70 percent -- detainees have won judgments that the United States is subjecting them to indefinite detention as al-Qaida or Taliban enemies without proof, and that they must be released. Federal judges have been reviewing classified intelligence and interrogation reports since June 2008, when the Supreme Court recognized the detainees' right to sue. The remaining prisoners have been held seven years or longer.

Even with the sensitive information blacked out, the judges' opinions offer reams of detail about what the detainees were doing when they were captured, how the U.S. took custody of and interrogated them, and why the courts have rejected specific pieces of evidence as unreliable or even completely unbelievable in the vast majority of the cases. These opinions are summarized and also available in full in ProPublica's updated database.

In ordinary criminal cases, a court order of release because of unjustified detention results in ... release. But in the terrorism detention cases, it promises no more than the "possibility" of release, U.S. Attorney General Eric Holder said in testimony before the Senate Judiciary Committee last week. Asked if the executive branch could take 10 years to release a detainee against whom there is no good evidence, he said only, "You would hope not."

The administration is expected to elaborate on its position that the courts can't make it release unlawfully imprisoned captives at an appeals court argument this Thursday. The dispute holds implications beyond Guantanamo, because at its core it questions the meaning of the constitutional doctrine of habeas corpus -- a fundamental American guarantee against unjust imprisonment -- in the potentially expanding context of terrorism detention.

Despite denying its duty to do so in court, the administration has quietly been releasing many of the detainees who've won their lawsuits, known as habeas petitions. Twenty of the men have been transferred to other countries, while 14 remain at Guantanamo as the government appeals the judges' decisions.