But if the most prominent resident of Palm Beach County has his way, Sea Grant would cease to exist. President Trump’s proposed 2018 budget seeks to eliminate the $73 million program, along with more than $177 million worth of other initiatives within the National Oceanic and Atmospheric Administration, many aimed at protecting communities from climate impacts.

Trump’s Mar-a-Lago resort, where he has spent about half of his weekends since taking office, is among the most vulnerable properties in the county. Most of the resort could be underwater by 2100, and the lowest areas already flood during certain tides.

And it turns out, the president isn’t the only member of the current administration with a personal connection to Sea Grant. The same program supports work along Alabama’s Gulf Coast, fortifying homes against coastal storms in and around the city of Mobile, Attorney General Jeff Sessions’ hometown. Back in 2002, Sessions even supported a Sea Grant initiative on seafood safety.

Both Sessions and Carson, like Trump, reject the scientific consensus of global warming. But Sea Grant enjoys bipartisan support, and its reach in red states such as Alabama highlights the gulf between the administration’s views on climate science and the reality on the ground, where climate considerations are embedded into communities nationwide.

The White House, Department of Justice and HUD did not address questions about the administration’s connections to Sea Grant.

Trump’s proposed budget does not specifically criticize the work done through the Sea Grant programs. But the budget states that while the programs support “coastal and marine management, research, and education … which primarily benefit industry and State and local stakeholders,” they are a “lower priority” than the “core” work of “surveys, charting, and fisheries management” that the Trump budget preserves.

The conservative Heritage Foundation’s budget blueprint, from which the Trump administration seems to have drawn heavily, does not mention the Sea Grant program. ProPublica left a message with the foundation to see if it supported the proposed cuts but did not get a response.

“We urge you to reconsider these dangerous cuts and instead submit a budget that requests adequate funding to allow NOAA to continue to provide the information and services needed to promote our national security and coastal economies,” six senators wrote in a letter to the White House Office of Management and Budget on March 10, after news broke of likely cuts to Sea Grant and other NOAA programs. The letter was written a week before Trump released his budget and was signed by three Republicans, two Democrats and an Independent.

Sea Grant operates through a network of state-based offices that provide research, education and outreach to coastal communities, with an emphasis on using applied research to solve real-world problems such as flood protection, fisheries management and seafood safety. In essence, they act as scientific consultants for residents and local governments.

Jim Diana, director of Michigan Sea Grant, said his program is “largely focused on helping coastal communities become more economically vibrant,” by supporting tourism and other industries. “It seems to me that’s also a desire of the Trump administration,” he said.

Jeffrey Reutter, who directed Ohio Sea Grant from 1987 to 2015, said the Reagan administration tried several times to get rid of Sea Grant, but Congress always reinstated the funds. 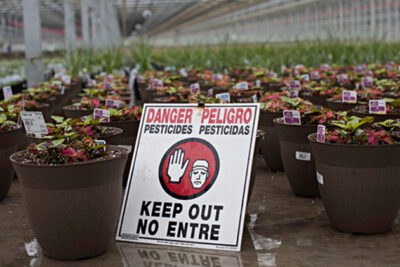 As Trump Slashes EPA, Worry Over the Fate of an Agency Doing Similar Work

Will the National Institute of Environmental Health Sciences’ work on the effects of pesticides, chemicals and cancer-causing compounds be undamaged by the new administration?

Sea Grant has remained largely out of the political spotlight. At times, that has meant being strategic about charged topics like climate change.

LaDon Swann, director of the Mississippi-Alabama Sea Grant Consortium, said they are “a neutral broker of science information.” Sea Grant helps communities build resilience to coastal hazards, including hurricanes, oil spills and flooding. When relevant climate science comes up, they simply present the data without comment, and it’s up to the community to decide whether to incorporate that information into their decisions, he said. “We’re not there to persuade [them] one way or another.”

Swann’s program recently partnered with Smart Home America, a nonprofit based in Mobile, to promote better building codes and encourage residents to get flood and wind insurance to protect their homes from storms.

Julie Shiyou-Woodard, the president and CEO of Smart Home America, said her organization has always been “extremely careful” about not mentioning climate change, even before the Trump administration.

“You can get very little done when you enter into some of these conversations here,” Shiyou-Woodard said. And while global warming can exacerbate coastal hazards, the communities she works with have always been at risk from flooding and high winds, she said, so it’s not necessary to mention climate when advising homeowners.

Given the work Sea Grant sponsors in Sessions’ hometown, and the attorney general’s attitude on climate science, Shiyou-Woodard said it’s unclear whether he would stand up for the program. “A significant portion of his voting constituency totally rely on the coastline” for their livelihoods, she said.

Swann said he hasn’t heard anything from Sessions’ office, but the attorney general is certainly aware of Sea Grant. In 2002, when concentrations of the toxicant methylmercury spiked in seafood, affecting sales in the Gulf of Mexico, Sea Grant held a scientific forum in Mobile. Swann said the meeting inspired then-Senator Sessions to help launch a federal task force on methylmercury, which published a report on the state of the science in 2004.

Like Swann, Diana, the Michigan Sea Grant director, is equally cautious about bringing up global warming. “When we deal with coastal communities, a lot of the time we’re dealing with the impacts of climate change like increased storms, increased runoff, hazardous conditions along the beaches. … But a lot of the time we don’t try to tie those to climate change just because of the baggage,” he said.

Diana said the topic is more likely to come up when they interact with kids. His program regularly takes students from inner-city schools on to the Great Lakes to teach them about the region’s ecology and history. He estimates they’ve reached more than 125,000 students over the past 25 years. “It’s had a huge impact on students. … It may be the only time they’ve been on a boat,” he said.

In contrast to Alabama and Michigan, officials in Palm Beach County openly talk about global warming.

Natalie Schneider, the climate change and sustainability coordinator for Palm Beach County, said the county was moving ahead with adaptation projects before Trump’s election and will continue to do so.

Removing Sea Grant is just one of the many cuts the administration has proposed, Schneider said. “These cuts are very detrimental to the state of science in the United States … [and] to the amount of progress we’ve made as a country” on climate change.

Schneider has offered to help Ruppert, the Sea Grant attorney, set up a workshop on sea level rise for local officials. Ruppert has presented his daylong workshop in neighboring counties but never in Palm Beach County. “We are constantly helping to set up workshops that further the cause of climate change sustainability in this county,” Schneider said.

Ruppert said his workshop informs municipalities about the liability risk associated with more frequent flooding. He’s one of the few Sea Grant employees whose salary is funded by the federal government, he said, so if Trump’s budget is enacted, Ruppert will lose his job.

Penni Redford, another local official helping coordinate the workshop, called Sea Grant “a great resource” for local governments that don’t have the means for complex research. Redford, who is sustainability manager at the city of West Palm Beach, said she hopes the event draws officials from Fort Lauderdale to Port St. Lucie, along a 100-mile stretch of the coast.

Florida is “ground zero” for understanding how climate change is already happening, Redford said. “When you live in a place where the sea never came up through the storm drains or never topped a seawall, and you see that happening on a periodic or more regular basis,” the impacts are obvious, she said.