It has little name recognition, a budget less than 10 percent of the Environmental Protection Agency’s, and is part of a government institute embraced by both of the nation’s major political parties.

Still, those concerned about the future of the National Institute of Environmental Health Sciences are wary of what’s to come.

“In light of what President Trump wants to do to the EPA, I don’t think any agency that deals with issues unpopular with the current government is going to escape,” said Tracey Woodruff, a professor at University of California, San Francisco’s School of Medicine.

The National Institute of Environmental Health Sciences is a branch of the National Institutes of Health based in Research Triangle Park, North Carolina. Founded in 1966 under President Lyndon B. Johnson, it has a 2017 fiscal year budget of $771 million, far less than the EPA’s $8.2 billion and a tiny fraction of the NIH’s $32 billion.

The NIEHS studies the health effects of pesticides, chemicals and cancer-causing compounds. Some of its work is akin to the EPA’s efforts on environmental health — programs that would be eliminated or rolled back under President Trump’s proposed 31 percent cut to the EPA’s budget.

Trump’s initial 2018 budget calls for a 19 percent cut in NIH funding and an unspecified “major reorganization” of NIH’s 27 institutes and centers “to help focus resources on the highest priority research and training activities.” But it doesn’t mention the NIEHS.

It’s not like the NIEHS hasn’t found itself in political crosshairs before.

Last spring, for instance, Rep. Jason Chaffetz, R-Utah, demanded documents from the NIEHS about its research with the Food and Drug Administration on Bisphenol A (BPA), a chemical used in food packaging that mimics the hormone estrogen. The FDA banned BPA from baby bottles and sippy cups in 2012, and California regulators declared the chemical a known reproductive toxicant three years later. Chaffetz’s wide-ranging inquiry asked for a slew of documents including “all communications referring or relating to BPA between any NIEHS employee and any FDA employee since April 1, 2008.” In response, NIEHS scientists met with GOP staffers from the House Committee on Oversight and Reform, which Chaffetz chairs, and spent an hour briefing them on the BPA study.

In 2013, after NIEHS Director Linda Birnbaum wrote a journal article summarizing the public health threat of endocrine disruptors — chemicals that can harm child development and reproductive health — two GOP members of the House Committee on Science, Space and Technology sent a letter to Birnbaum’s boss, NIH Director Francis Collins, demanding to know if the article represented Birnbaum’s personal views or the views of the Obama administration. An NIH official wrote back, saying the article was published in a peer-reviewed journal, and that Birnbaum’s “scientific views cannot be separated from her role as an institute director.”

And when the NIEHS released a congressionally mandated Report on Carcinogens in 2011, an industry group sued the Department of Health and Human Services for the report’s inclusion of styrene (used in rubber and plastics manufacturing) as a compound that’s “reasonably anticipated” to cause cancer. The suit was dismissed, but it led to a contentious House hearing at which Republican representatives criticized the NIEHS while Democrats condemned the chemical lobby.

Although Congress has final say over agency budgets, the White House proposal has added to general anxiety over the future of science, climate and environmental health funding. EPA Administrator Scott Pruitt created a flurry of controversy recently when he declared carbon dioxide was not a primary contributor to climate change, rejecting decades of scientific consensus. And Trump’s budget would eliminate the EPA’s Endocrine Disruptor Screening Program, which evaluates up to 1,000 chemicals a year for their potential to act as endocrine disruptors.

The NIEHS and the White House Office of Management and Budget didn’t respond to requests for comment about the budget. An NIH spokeswoman referred to a statement from Secretary Tom Price, who leads NIH’s parent agency, the Department of Health and Human Services. “HHS is dedicated to fulfilling our department’s mission to improve the health and well-being of the American people. This budget supports that mission and will help ensure we are delivering critical services to our fellow citizens in the most efficient and effective manner possible,” Price said.

Cuts to federal environmental health programs could reach beyond the NIEHS and EPA. The Centers for Disease Control, Agency for Toxic Substances and Disease Registry and the Food and Drug Administration all do similar work, though the White House budget says little about their funding. Details of individual agency and program budgets will be hashed out over a monthslong process in Congress. 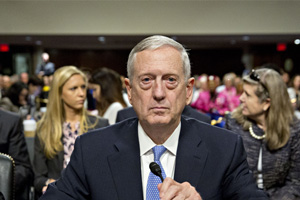 James Mattis’ unpublished testimony before a Senate panel recognizes a threat others in the administration reject or minimize. Read the story.

Some scientists believe the NIEHS can avoid budget cuts by keeping a low profile, especially because the NIH usually gets bipartisan support.

Others say that’s wishful thinking. “Congress is well aware of the impact of research coming from the NIEHS,” said Thomas Zoeller, a biology professor at University of Massachusetts, Amherst, who’s received NIEHS grants for his research.

“NIEHS is one of the least funded institutes” within the NIH. “A 20% budget cut [at NIH] is pretty significant and will give the new director — depending on who that is — an incredible amount of power in setting the research agenda,” Zoeller said in an email.

Carol Kwiatkowski, executive director of the Endocrine Disruption Exchange, said there’s “no reason” why the NIEHS should be a target any more than the rest of the NIH, which study cancer, aging, diabetes and other illnesses. Kwiatkowski’s group is a nonprofit that studies how endocrine disruptors affect humans and the environment. Kwiatkowski said she’s received NIEHS funding and collaborated with NIEHS researchers.

The NIEHS has no regulatory power, so it’s been able to conduct independent science with less political pressure than the EPA, she said. The institute presents evidence on the hazards of certain substances without dictating policy, though regulatory agencies may cite its work when developing new rules.

Here’s a snapshot of several NIEHS programs that could be at risk:

Launched in 1998, this initiative funds multidisciplinary research on children’s health. One of the grant recipients is CIRCLE (the Center for Integrated Research on Childhood Leukemia and the Environment), a collaboration among universities that studies the causes of childhood leukemia, the most common form of cancer in kids.

According to Catherine Metayer, the principal investigator and a public health professor at University of California, Berkeley, childhood leukemia has increased by 35 percent over the past 40 years. The human genome can’t change that quickly, so the cause must be environmental in nature, Metayer said. Exposure to pesticides, air pollution and cigarette smoke are all linked to increased leukemia risk.

In the latest round of funding, CIRCLE received $6 million last summer from the EPA and NIEHS to be distributed over four years. Part of the funding will be used to study archived blood samples of mothers and newborns to see how chemical exposure during pregnancy affects children’s immune systems and subsequent risk of developing leukemia. Metayer said it’s a new methodology, and she has no idea if potential budget cuts would imperil the project.

“I do hope that every human being, regardless of their political stance, will understand how important it is to provide a clean environment to children,” she said.

The NIEHS began supporting Metayer’s research 20 years ago, and the EPA came on board in 2008, she said. The long-term, sustained support has allowed the researchers to collaborate with scientists worldwide. It also funds a major outreach effort to educate doctors and community members on how to reduce chemical exposures to lower leukemia risk.

Without the NIEHS, “we would not be here,” Metayer said.

Chaffetz criticized this $30 million project last year. The study combines research from 12 university labs and the FDA. Many large-scale BPA studies have been stymied because it’s difficult to compare results from academic labs, regulatory agencies and industry, all of which use different methods. This project tries to address that by standardizing research methods across all the labs.

This division of the NIEHS produces the Report on Carcinogens every two years, providing updates on the latest substances that are known or reasonably suspected to cause cancer. These reports have been congressionally mandated since 1978, and the NIEHS makes its decisions based on a review of the latest science. The most recent report, released just a few days before the election, added seven substances: five viruses (including HIV-1), the element cobalt and trichloroethylene, a chemical used to make refrigerants.

The program funds university research on new technology to clean up toxic Superfund sites and provides commercialization support to quickly move the science from the lab to the field.

Martyn Smith, a University of California, Berkeley toxicology professor who directs the Superfund Research Program at his university, said he’s optimistic about its future. “We’ve been very successful in keeping that program even when [politicians] wanted to eliminate the EPA,” he said. The NIEHS-funded research feeds into the EPA’s Superfund cleanup.