Months after President Donald Trump promised to open FBI files to help families of the 9/11 victims in a civil lawsuit against the Saudi government, the Justice Department has doubled down on its claim that the information is a state secret.

In a series of filings just before a midnight court deadline on Monday, the attorney general, William Barr; the acting director of national intelligence, Richard Grenell; and other senior officials insisted to a federal judge in the civil case that further disclosures about Saudi connections to the 9/11 plot would imperil national security.

But the administration insisted in court filings that even its justification for that secrecy needed to remain secret. Four statements to the court by FBI and Justice Department officials were filed under seal so they could not be seen by the public. An additional five, including one from the CIA, were shared only with the judge and cannot be read even by the plaintiffs’ lawyers.

Barr insisted to the court that public discussion of the issue “would reveal information that could cause the very harms my assertion of the state secrets privilege is intended to prevent.”

What the various security agencies are trying to hide remains a mystery.

Since the plaintiffs filed their lawsuit in federal district court in New York in 2017, their primary focus has been on the relationship between the hijackers and relatively low-level Saudi officials. Those include at least two Saudis who crossed paths in Southern California with the first two al-Qaida operatives who were sent to the United States by Osama bin Laden in January 2000.

Yet the broad outlines of the hijackers’ connections to those two Saudi officials — a diplomat at the kingdom’s Los Angeles consulate and a suspected Saudi spy living as an exchange student in San Diego — have been publicly known for years. The FBI shared thousands of pages of its files on the plot with the bipartisan 9/11 Commission, which explored them in its 2004 report.

“The extraordinary lengths that they’re going to here suggest that there must be some deep, dark secret that they’re still trying very hard to hide after almost 20 years,” said a lawyer for the families, Steven Pounian. “But who are they protecting? Something might be a Saudi government secret. But how can these be secrets that still need to be kept from the American people after all this time?”

The Justice Department has declassified some information about the Saudi role in 9/11 and shared it with lawyers for the plaintiffs under a protective order that allows them to read it but not make it public. But the department has not asked the lawyers to obtain security clearances to view other material, as is fairly common in national security cases involving American and foreign citizens whose constitutional rights are at issue.

The chorus of senior national security officials who wrote in support of the Trump administration’s secrets claim appeared to respond in part to Justice Department guidelines set down by the Obama administration in 2009. Those rules were intended to restrain overly aggressive use of the privilege, which the administration of George W. Bush had often cited after 9/11 to block legal challenges to its policies on torture, extraordinary rendition and warrantless surveillance.

Barr cited those more restrictive guidelines in his statement to the district court, noting that they prohibited the government from asserting a state secrets claim in order to conceal illegalities or potential embarrassment. He assured the magistrate judge in the case, Sarah Netburn, that those guidelines had been met.

At a ceremonial gathering at the White House last Sept. 11, representatives of the families of those killed in the attacks repeatedly asked Trump for fuller access to the FBI’s secret files in the case. According to more than a half-dozen people who were at the meeting, he assured several of them he would help.

“He looked us in the eye on 9/11, he shook our hands in the White House and said, ‘I’m going to help you — it’s done,’” recalled one of those present, Brett Eagleson, a banker whose father was killed in the World Trade Center. “I think the 9/11 families have lost all hope that the president is going to step up and do the right thing. He’s too beholden to the Saudis.” 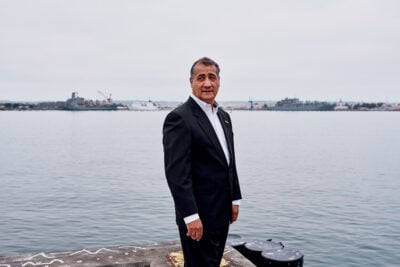 The White House press office did not immediately respond Wednesday to a request for comment on the families’ characterizations of the meeting. One day after that encounter, Justice Department officials agreed to release the name of one mid-level Saudi religious official who had been tied to the case in an FBI document that had been partially declassified earlier. At the same time, however, Barr asserted the state secrets privilege to protect other FBI documents sought by the families. The latest flurry of statements supporting that claim responded to challenges from the plaintiffs.

Although the close alliance between the United States and the Saudi kingdom has survived countless moments of tension, it has frayed in recent months in ways that could prove helpful to plaintiffs in the 9/11 lawsuit.

In recent weeks, Republican senators from states that have been hard hit by the collapse of world oil prices have criticized the Saudi government with growing intensity. On March 25, before the Trump administration negotiated a cut in Saudi oil production, Sen. Lisa Murkowski of Alaska cited the law under which the 9/11 families were allowed to sue the Saudi government as one of the levers of pressure that the United States could use if the kingdom did not take account of American concerns.

In a letter on Monday, three other influential senators asked the Justice Department’s inspector general to examine in depth why the FBI has refused to disclose more information about Saudi connections to the plot in response to a subpoena filed by the 9/11 families in 2018.

Those senators, Charles Grassley, the Iowa Republican, and two Democrats, minority leader Charles Schumer of New York and Richard Blumenthal of Connecticut, cited a recent investigative report by ProPublica and The New York Times Magazine that raised new questions about the FBI’s inquiry into the Saudi role in the attacks.

“The September 11 attacks represent a singular and defining tragedy in the history of our Nation,” the senators wrote to the Justice Department inspector general, Michael Horowitz. “Nearly 20 years later, the 9/11 families and the American public still have not received the full and transparent accounting of the potential sources of support for those attacks to which they are entitled.”