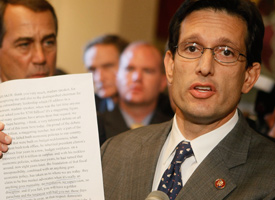 House Republican Whip Eric Cantor, a rising star in the Republican party, has been a prominent voice demanding accountability in how the government doles out hundreds of billions for bank bailouts.

"I think most American taxpayers now are sort of scratching their head," Cantor told CNN in December, "wondering when all this bailout stuff is going to end. And probably thinking, 'You know, when is my bailout coming?'"

This Thursday, Cantor cast a high-profile vote opposing release of another $350 billion in bailout funds. Unpublicized until now was a recent development: The Treasury Department used $267 million of taxpayer funds to buy preferred stock in a private banking company that employs Cantor's wife.

The bailout for New York Private Bank and Trust (NYPBT) came earlier this month as part of a Treasury Department program to boost "healthy banks" with extra capital. NYPBT is the holding company for Emigrant Bank, a savings bank with 35 branches in and around New York City. Diana Cantor runs the Virginia branch of Emigrant's wealth-management division, called Virginia Private Bank & Trust, which targets an ultra-rich clientele.

Rob Collins, Cantor's deputy chief of staff, said the congressman didn't know the bank was seeking bailout money and never interceded on the bank's behalf with government regulators. He also said Cantor had never intended the bailout bill to be used to buy up stock in banks.

"No one knew outside the Treasury Department, including Congressman Cantor, how the bailout money would be used," Collins said.

A spokesman for the bank said Diana Cantor "has nothing to do with the operation of the main bank" and was "never aware that the parent bank was seeking or received [bailout] funding."

Financial analysts say Emigrant is struggling and could use the government's cash, although a spokesman for NYPBT says Emigrant is healthy.

The Virginia Private Bank & Trust, a satellite opened this spring, is still getting off the ground. On Thursday, when ProPublica visited its small Richmond office in an office park not far from the Cantors' home, a sheet of white paper taped to the door served as its sign. One of the two employees there said the office had yet to serve a client since it opened last spring. She referred further queries to the bank's main office.

In an April interview with Private Wealth magazine, NYPBT executives said that Virginia was the first of several regional locations planned for the bank's division concentrating on wealthy investors. The New York branch opened in 2005, concentrating on New York City area clients wanting to invest more than $50 million.

Diana Cantor comes to the job with many years of financial experience. She was hired in early 2008 after a long tenure running the Virginia College Savings Plan. Rep. Cantor's personal financial disclosure shows that she received a "consultant fee" from NYPBT in 2007 as well.

House Republicans elected Cantor as whip last month, making him their second-highest ranking member. Before that, Cantor served as chief deputy whip, helping to round up votes for legislation. In September and October, he, along with the Republican leadership, supported the $700 billion Treasury rescue plan, called the Troubled Asset Relief Program, after first pushing an alternative: a government insurance fund supported by premiums paid by the banks.

"Let's not turn to the taxpayers,” Cantor told CNN in late September. "Let's have the investors on Wall Street, frankly, who own these assets pay for the premium, pay for the government guarantee, so we can get our markets going again."

The Treasury’s initial bailout plan called for purchasing banks' toxic mortgage-backed securities. That changed in mid-October, becoming a program to directly invest in the nation's banks. Since then, Cantor and other House GOP leaders have been increasingly critical of Treasury's handling of the bailout.

In December, Cantor signed two letters from the House Republican leadership. The first called for the CEOs of the banks receiving bailout money to testify before Congress about how the funds had been used. The second letter warned Treasury and Federal Reserve officials that the remainder of the bailout money wouldn't be released until they explained how the investment in banks was helping the economy.

NYPBT is one of more than 250 banks to have received money through what is called the Capital Purchase Program, a major component of the $700 billion bailout. The money is supposed to be reserved for "healthy banks," Treasury officials have said, but in the eyes of analysts, NYPBT seems less than fully healthy. Last October, Fitch Ratings downgraded Emigrant to below investment grade, pointing to "expected recognition of losses in its investment portfolio."

Fitch analyst Ken Ritz told ProPublica that "given the litany of banks" approved for bailout money, it "wasn’t wholly unexpected" that NYPBT would be approved. Nevertheless, Fitch's outlook for Emigrant remains negative.

NYPBT is one of 47 private banks to have received bailout cash so far in exchange for preferred shares. Treasury officials have said that thousands of banks have applied.

A spokesman for NYPBT said the bank is "one of the best run banks in the country" and is "well-capitalized." As of Sept. 30, NYPBT did meet regulators' requirements to be considered "well-capitalized," a standard of financial strength, according to data gathered by the FDIC. The bank's spokesman said pursuing the money was simply "prudent" given "the uncertain economic outlook."

Howard Milstein, the CEO of the bank, told the trade publication American Banker last week that he'd been eager to get the government's investment -- so eager that he'd changed the bank's tax status from an "S corporation" to a "C corporation," because S corporations weren't included in the initial bailout round.

"I like to get things done, because anything can happen if you wait," he told the magazine. "We wanted to make sure we were in a position to get it for sure and get it sooner." Milstein said the bank planned to use the extra money to increase Emigrant's commercial and real-estate lending.

Milstein was an early advocate of government support for banks that got into trouble with subprime mortgages. In February 2008, well before the financial crisis took hold, he penned an op-ed column for the New York Times suggesting the government guarantee mortgages for 15 years if banks agreed to leave low "teaser" interest rates in place.

Collins, Cantor's aide, said the fact that NYPBT had to change its tax designation to receive bailout money undercuts any implication that his boss had tried to help the bank.

Keith Ashdown, chief investigator at the nonpartisan advocacy group Taxpayers for Common Sense, said the circumstances create an appearance problem for Cantor. "It looks very bad to the public when a very influential lawmaker's wife could be benefiting," he said.

Collins called it unfair to suggest that Diana Cantor benefited. "Since no experts, soothsayers or former U.S. Treasury secretaries at any point or time have predicted the changes in how the bailout money would be used, there is neither logic nor reason to connect these apples and oranges," he said.

Editor’s note: Investigative reporter Aram Roston formerly worked for NBC News and is the author of "The Man Who Pushed America to War," a biography of Ahmed Chalabi. Paul Kiel is a ProPublica reporter.