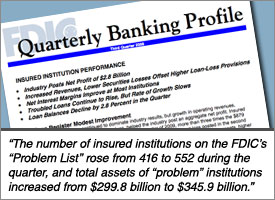 The FDIC released its quarterly survey of the banking industry today. On Page 3 of the survey, lodged in the middle of a paragraph titled, "Only Three New Charters Were Added in the Third Quarter," the agency  announced the new number of "problem" institutions. The "Problem List" rose from 416 to 552 during the quarter. Total assets of "problem" institutions increased from $299.9 billion to $345.9 billion. Both the number of problem banks and the amount of their assets are at the highest level since the end of 1993, according to the FDIC.

So far this year, 124 FDIC-insured banks have failed. At ProPublica, we've been keeping a complete list of failed banks this year, along with the major enforcement actions against them. The banks on the FDIC's problem list are not named, presumably to prevent a run on them. But the blog Calculated Risk has put together its own list of problem banks, and it names names.

For only the second time in its history, the FDIC's insurance deposit fund has also slipped into the red, to a negative $8.2 billion.The agency has dealt with the deficit by arranging for the industry to prepay three years of assessments in advance, which is expected to raise $45 billion.

The FDIC's report includes all kinds of cool information like statistics on the industry and call reports for individual banks.

Rest assured, the media did not bury the lead the way the FDIC did.