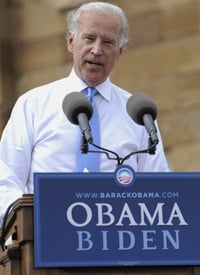 With Sen. Joe Biden joining the Democratic ticket, there's renewed scrutiny of Biden's connections to the credit card industry. Biden has been particularly cozy with MBNA, a financial services company from Delaware, and now a subsidiary of Bank of America.

Over the past 20 years, MBNA has been Biden's single largest contributor. And as the New York Times and Wall Street Journal note, Biden's son Hunter was hired out of law school by MBNA and later worked as a lobbyist for the company.

The Times also details just how helpful Biden has been to MBNA and the credit card industry. The senator was a key supporter of an industry-favorite bill -- the "Bankruptcy Abuse Prevention and Consumer Protection Act of 2005" -- that actually made it harder for consumers to get protection under bankruptcy.

As the Times notes, Biden was one of the first Democratic supporters of the bill and voted for it four times until it finally passed in March 2005. A spokesman for Sen. Obama told the Times, "Senator Biden took on entrenched interests and succeeded in improving the bill for low-income workers, women and children."

Yet the Times actually looked at the legislative record and paints a different picture:

[Biden] was one of five Democrats in March 2005 who voted against a proposal to require credit card companies to provide more effective warnings to consumers about the consequences of paying only the minimum amount due each month. Mr. Obama voted for it.

Mr. Biden also went against Mr. Obama to help defeat amendments aimed at strengthening protections for people forced into bankruptcy who have large medical debts or are in the military; Mr. Biden argued that the amendments were unnecessary because the legislation already carved out exemptions for those debtors. And he was one of four Democrats who sided with Republicans to defeat an effort, supported by Mr. Obama, to shift responsibility in certain cases from debtors to the predatory lenders who helped push them into bankruptcy.

The Washington Post's David Broder detailed other industry-friendly aspects of the bill back in 2005. One proposed amendment to the bill would have stopped corporations from "judge-shopping" and going to the most-friendly venues for their bankruptcy cases. The amendment was introduced by Republican Sen. John Cornyn of Texas and appeared to have wide bipartisan support. But it never passed. Broder writes that Biden helped kill it.