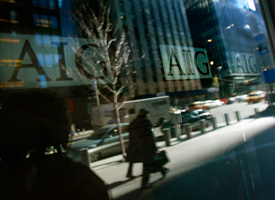 It seems like yesterday that AIG's life insurance companies were touted as the stable crown jewels of the beleaguered financial and insurance giant. But today -- amid headlines that the government may once again rejigger AIG's $150 billion bailout to fend off bankruptcy -- those core companies are at the center of the storm.

Last week, ProPublica first reported a potential hurdle in the sale of American Life Insurance Company, the foreign subsidiary once thought to be worth as much as $30 billion. In its offering memorandum describing Alico, the company had not disclosed an unresolved tax issue to bidders, including MetLife, which was the first to make an offer for Alico, for $11 billion. Now, according to news reports, that offer could be adjusted to as little as $8 billion. MetLife declined to comment, and it is not clear to what extent the difference reflects the tax matter or broader market conditions.

At issue is whether Alico should have been withholding tax from some $10 billion in annual disbursements it made to foreign customers. Alico's chief financial officer, Dennis Vigneau, said the company will be in the clear once the IRS has a chance to review the situation.

A tax expert who was hired by AIG to deal with the IRS told ProPublica that disclosure of the issue could lower bids on the company by as much as 25 percent. Vigneau said the company would alert bidders once they expressed serious interest in buying Alico.

The tax issue comes amid other news of the company's plunging investments. Alico holds an unusually large portion of its assets in AIG parent company stock -- a practice that insurance regulators in several states characterized as worrisome. As AIG's stock price has shriveled to less than a dollar, Alico's assets have dropped by more than $3 billion, or more than half the company's surplus. Last fall, AIG was forced to inject $2 billion into Alico's Japan branch to shore it up.

News accounts have said AIG may post up to $60 billion in losses when the company files its annual report next week.

The revelations combined with depressed market conditions have made it exceedingly difficult for AIG to sell either Alico or American International Assurance, its largest and highest-earning subsidiaries, for a price that would come close to repaying taxpayers for the $60 billion loan that was part of the bailout. Should the government decide that selling the companies for an acceptable value is impossible, Americans can look forward to Washington's emerging plan B: acquire and manage the foreign life companies itself.