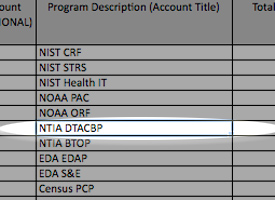 According to weekly reports intended to help average citizens hold the government accountable for stimulus spending, the Department of Commerce has already doled out $5.5 million for something called "NTIA DTACBP." It turns out, the money is for converter boxes that will let the proud owners of antique, rabbit-eared TV's stay tuned-in when broadcasts shift from analog to digital format.

Earlier this week, we called out Recovery.gov for being confusing by couching such reports in bizarre acronyms, newly issued "treasury codes" and ambiguities about the difference between real and planned spending.

"I'm working very hard to get on my staff people who can write in English and put stuff up there that people are going to be attracted to," said Earl Devaney, the stimulus oversight chief, in testimony before a Senate committee yesterday.

Sen. Claire McCaskill (D-MO) suggested that Devaney take that plan a step further by converting the critics. "Unfortunately for our democracy," there are a lot of unemployed journalists out there, and Devaney could benefit by including some on his team, she said.

For much of the hearing, senators harped on the generally acknowledged flaws of the transparency Web site. Sen. Tom Coburn, an Oklahoma Republican, told Devaney he'd spent 10 minutes browsing the sight earlier yesterday morning, and "there's nothing on it." He said he hoped the site would eventually reach the comprehensiveness of USAspending.gov, a well-regarded federal contracting site. That critique highlights an ongoing challenge for stimulus overseers: They must juggle the conflicting missions of spending the money extremely quickly, while also enforcing the adminstration's high standards for transparency and accountability.

"Our goal is to eventually merge the best of both Web sites," Devaney said, explaining that he hoped Recovery.gov would eventually include the ground-level detail of USAspending.gov while preserving its ability to track spending data in "real-time."

Rob Nabors, the No. 2 man at the Office of Management and Budget, had just asserted that there's a significant lag time on processing the spending site's contracting data. At the time of the hearing, the most recent reports on Recovery.gov were already two weeks old. New reports were posted soon after. We're taking a look at them now.