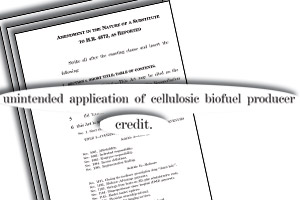 Last week, we asked readers to help us figure out why, amongst the talk of health care in the House reconciliation bill, there was a paragraph eliminating the "unintended application of [a] cellulosic biofuel producer credit."

We were as curious as anyone as to what sediment in biofuel has to do with health care, but it was Friday afternoon, after all, and even journalists like to go home sometimes, even if said home is a dank cell in Brooklyn.

Luckily, our readers came through for us (we owe you one).

As Mark Smith put it, the language eliminates "the boon to the paper industry from adding diesel fuel to its wastes before burning and claiming biofuel credit."

For the purpose of, "$ income for CBO score," @michaelwhitney helpfully tweeted.

Bottom line: Making it harder to get the tax credit will save the government money. And everything in the bill that saves the government money makes health care reform look cheaper on paper, because of the way the nonpartisan Congressional Budget Office evaluates the cost of legislation. And we care what the Congressional Budget Office (a.k.a. the CBO) says a bill will cost, because that's the official price tag that will remain affixed to the bill in perpetuity.

Turns out, making paper produces a byproduct called "black liquor," which can, in turn, be used to fuel a paper plant. Most U.S. paper producers have done this since the 1930s -- without receiving a tax credit of any kind.

Then, in 2007, an earlier law intended to encourage the mixture of biofuels (like ethanol) into fuel for automobiles was changed so that it could be claimed for fuel used for non-transportation purposes. Cha-ching for paper companies! Now they could get cash back for something they had been doing all along!

By shutting down the black liquor spigot, this language offsets billions of the cost of health care reform -- about $25 billion worth over 10 years, it seems.

The House has been pursuing this line of revenue generation for some time, according this firedoglake article that several folks pointed us to: Earlier stand-alone legislation aiming to rule out the credit for black liquor was folded into the manager's amendment of the original House health care reform bill.