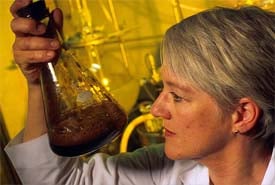 From the murky depths of the health care reform reconciliation bill re-emerges an unholy mixture of industrial waste and shady Congressional bookkeeping.

In Part I of our reporting last week, we shared a mystery with our readers: What was biofuel language doing in the health care reform reconciliation bill?

And, with help from readers, we thought we had the mystery solved. Through unintended application of a tax credit designed to encourage use of alternative fuels in motor vehicles, paper companies have managed to get an estimated $7 billion from the U.S. Treasury for continuing to use a pulp byproduct – called black liquor – to fuel factories, a practice they had been employing anyway since the 1930’s.

All true – but not the whole story.

That tax credit, known as Black Liquor I, was for 50 cents per gallon, and it expired at the end of 2009.

But just like a hatchet-wielding horror movie villain, tax credits for black liquor were resurrected as soon as our backs were turned. Or so it seemed.

In October, in response to a question from a field agent, the IRS issued this ruling, saying paper companies would be able to claim an even more lucrative $1.01 per gallon tax credit designed to encourage production of biofuels out of materials people don’t eat, instead of corn – the price of which has been driven up by biofuel-related demand.

Then the House of Representatives charged in, seemingly to the rescue. The original House bill included language banning (in a roundabout way) the application of the tax credit to Black Liquor, appearing to save taxpayers about $25 billion. Putting the language in the health care bill offset some of the increased costs, making the health care package technically $25 billion cheaper.

Enter the Senate, stage center. The chamber’s cheaper proposal did not require a $25 billion spending offset to make it look affordable, and besides, some powerful Senators had other plans for the on-paper savings. The Senate left out the biofuel language, and when the Senate bill emerged as the vehicle for health care reform via reconciliation, it appeared Son of Black Liquor had died on the Senate floor.

But Son of Black Liquor was back and standing right behind American taxpayers!

It turns out, however, the House may be the actual villains, because paper companies have repeatedly said they don’t believe they can get EPA clearance for the somewhat different Black Liquor production process that would be required to qualify for the Black Liquor II tax credit. Plain English subtitle: Closing a tax loophole no one was planning to use doesn’t actually save the government any money.

So, who, if anyone, can we blame? In this piece for WNYC’s The Takeaway, Todd Zwillich finds that many members of Congress didn’t actually know Black Liquor was back. (Also: if you listen all the way through, you will be rewarded with Sen. Charles Grassley, R-Iowa, explaining why the accounting makes sense.)