COVID-19 has killed many young Black men with deadly efficiency. When ProPublica reporters began collecting their stories and speaking to health experts to understand why, their efforts led them to a little-known body of research that takes its name from one of the most enduring symbols of Black American resilience.

Sherman James is a social epidemiologist who has spent the past four decades exploring why Black men have higher rates of diseases that lead to shorter lifespans than all other Americans.

His conclusion is that the constant stress of striving to succeed in the face of social inequality and structural racism can cause lasting physical damage.

“The stress is enormous. And people, people don’t give up,” James said.

Who Was John Henry? 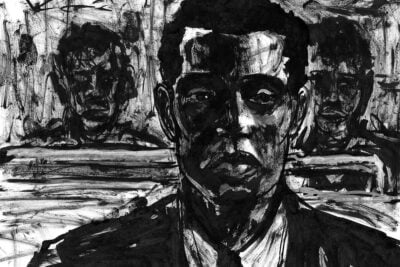 How COVID-19 Hollowed Out a Generation of Young Black Men

They were pillars of their communities and families, and they are not replaceable. To understand why COVID-19 killed so many young Black men, you need to know the legend of John Henry.

As the legend goes, John Henry was a steel-driving man who defeated a steam-powered drill and died with a hammer in his hand. The folktale celebrates one man's victory against seemingly insurmountable odds. But it holds another, harsher truth: his determination and strength are also what killed him.

The John Henry of contemporary social theory is a man striving to get ahead in an unequal society. The effort of confronting that machine, day in and day out, leads to stress so corrosive that it physically changes bodies, causing Black men to age quicker, become sicker and die younger than nearly any other U.S. demographic group.

“It's this striving to make something of themselves … to live their lives with dignity and purpose and to be successful against extraordinary circumstances,” James said.

What Is John Henryism?

Black people have much higher rates of hypertension, obesity, diabetes and strokes than white people do, and they develop those chronic conditions up to 10 years earlier. Studies link these health problems to stress. The unique, unrelenting strain caused by racism can alter a body’s normal functioning until it starts to wear down. John Henrys, who battle with an unequal system as they try to get ahead in life, bear the consequences in their bodies. “The stress,” James said, “is going to be far more overwhelming than it has a human right to be.”

The stress-linked underlying conditions that Black people develop younger are the very ones that make people more vulnerable to the worst outcomes from the coronavirus. When the Brookings Institution examined COVID-19 deaths by race, Black people were dying at roughly the same rate as white people more than a decade older.

“They could have done so much more had the struggle not been so intense,” James said. “They were cut down too soon.”