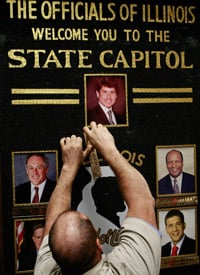 What will life be like without Rod Blagojevich making headlines, now that the Illinois Senate voted unanimously yesterday to impeach him for abusing his power?

For old time's sake, today's papers take us through Blagojevich's last day in office. An unapologetic speech to an utterly unsympathetic audience of state senators, a couple pardons and one last trip on state aircraft, and he was done as governor.

After boycotting his Senate trial for three days, Blagojevich went to the state capital yesterday to make one last call for mercy.

Minutes before he was to appear on the Senate floor, Mr. Blagojevich stood up and told an aide: "Let's go home. Screw it. It won't matter." Then he walked out and made his speech.

Defiant to the end, Blagojevich told senators: "I want to apologize to you for what happened, but I can't. If I felt I did something wrong...I wouldn't put the people of Illinois through this."

His plea was to no avail. About three hours later, senators voted 59 to nothing to convict Blagojevich, who is the first governor in Illinois' 190-year history to be ousted from office. The Senate also voted unanimously to prevent Blagojevich from ever holding office in Illinois again.

But don't count him out yet. Blagojevich hinted that he might still fight his removal, possibly in court, the Times reported. "Look," he said, "I always think creatively. I don't give up."

Blagojevich maintained that the Senate's trial rules were unfair and violated due process because they prevented him from calling witnesses related to his criminal trial. (He was arrested last year on federal corruption charges, among them, that he tried to sell Barack Obama's vacant Senate seat for personal benefits. He has not yet been indicted.)

In his last action as governor, Blagojevich expunged the criminal records of two Chicago men. One man, a janitor at the Chicago homeless shelter where Blagojevich's wife worked until recently, had a drug conviction. The other, Fred S. Latsko, is a Chicago real-estate developer convicted in 1985 of theft by deception and forgery, an Illinois Prisoner Review Board official told ProPublica. The board received this information from Blagojevich's office, the official said.

Later, Blagojevich contemplated his exit strategy back to Chicago, where he lives.

"I wonder if we'll have to hitchhike home," he said. "Maybe we could take the bus."

Nope. Before the vote prevented him from using state resources, he hopped on the state plane and headed home.

The Timescaptured Blagojevich in a reflective moment on his plane ride home:

"We should have been more selfish, not selfless," he said. "It sounds probably perverse for me to say that based on what some people are saying about me. But it's true. My family, we didn't take advantage of all these things that people do. My successor has done a whole bunch as the lieutenant governor -- taken all kinds of trips all over the world and trade missions -- like he's got anything to do with anything as lieutenant governor."

So who is Pat Quinn? After taking his oath yesterday, he proclaimed, "We want to make this year a year of reform in Illinois."

Yet when Quinn and Blagojevich ran together for re-election in 2006, two years into the federal investigation into Blagojevich's administration, Quinn said: "In all my interactions with him, I've found him to be an honest person."

Meanwhile, when Blagojevich arrived home, greeted by a throng of reporters on his stoop, he stopped to say: "And the fight goes on."