In a request to the state’s housing agency, City Council member Stephen Levin and state Assembly member Jo Anne Simon cited a “troubling history” at the building, located near downtown Brooklyn at 125 Court Street and owned by Two Trees Management.

As ProPublica reported, Two Trees received more than $10 million in tax relief under a program that required it to provide rent-stabilized apartments. Records showed the initial tenants — including dozens in low-income units — were charged at least $368,000 in excess rents. 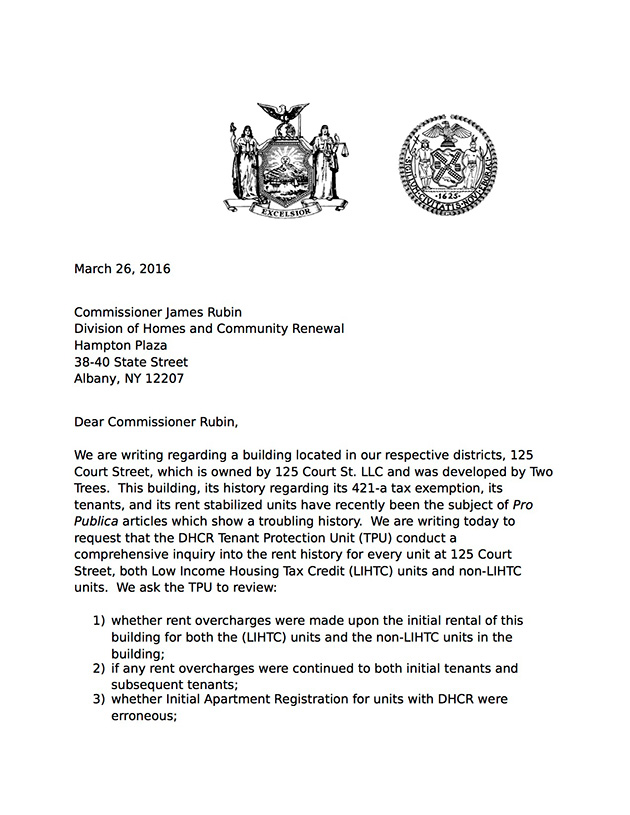 Under rent stabilization, landlords must limit increases to levels set by the city. Some tenants at 125 Court Street saw increases that were double and triple the allowed amounts. Two Trees confirmed that it had “accidentally” overcharged tenants in the years after the building opened in 2005 but said it readjusted rents and credited tenants for $300,000 in overcharges.

The tax credit continued unimpeded, even though city officials confirmed in November that they had never given Two Trees final approval in the subsidy program.

Levin and Simon asked the state’s Department of Housing and Community Renewal to conduct a “comprehensive inquiry into the rent history for every unit at 125 Court Street.” The agency has a Tenant Protection Unit that is charged with investigating rent-regulation violations.

Their letter notes that under the law, tenants in rent-stabilized apartments can be entitled triple damages for overcharges — $3 for every $1 they overpaid.

“It is deeply distressing that the task of identifying rental overcharges, and obtaining restitutions when overcharged are identified, falls to the tenants themselves — in this instance, 7 years later,” Levin and Simon wrote.

Asked about the letter, Two Trees Management said in a statement, “We take our obligations to our tenants extremely seriously, and as we said previously, this was an isolated incident where we identified and corrected mistakes made years ago.”

Cezary Podkul contributed to this report.