On a Wednesday morning in early July, the Oahu Island Burial Council logged on to Zoom for its monthly meeting. Members, who are appointed by the governor to oversee and consult on the treatment of Native Hawaiian remains, faced a long agenda. Bones had been found at a variety of construction sites. Some were discovered under a sidewalk, others near a waterline replacement project.

Kamuela Kala‘i was there to speak up for ancestors in Waimanalo, a Native Hawaiian community in eastern Oahu. In January, workers had found human remains, or iwi kupuna, as they reshaped a multimillion-dollar oceanfront lot into a luxury compound being developed by Marty Nesbitt, the chair of the Obama Foundation and head of a Chicago-based private-equity firm. The bones were unearthed in an area where the owners were planning a swimming pool and septic system, and they were reburied months later on another part of the property. A state official made the decision to relocate the remains.

Kala‘i was furious with the developers.

“All over the place, our kupuna, somehow it is OK to sacrifice them for the sake of buildings and cesspools and swimming pools,” Kala‘i said, her voice trembling. “It’s not OK. It’s not OK. I will say that until the last breath in my body can say it.”

It’s not uncommon for developers in Hawaii to encounter buried remains. For more than 2,000 years, Native Hawaiians buried their loved ones throughout the terrain, particularly in sand dunes, which are now prime real estate. But the discovery in Waimanalo has added to the complexity of a redevelopment project with ties to Barack Obama. State officials and community members say the former president, who grew up in Hawaii, will be among the property’s future occupants

Obama’s personal office declined comment on the Waimanalo property, referring inquiries to Nesbitt. A close friend of the former president, Nesbitt declined to be interviewed. In written responses, he would not directly answer questions about ownership, only saying that he and his wife bought the property and were the “developers” of the estate. He said members of the Waimanalo community versed in cultural practices had respectfully reburied the remains.

“It is our goal to honor Hawaiian culture in every way possible and to become good and respectful neighbors,” he wrote. “We look forward to developing a strong relationship with the community of Waimānalo.”

Tensions are already high. The state previously approved an easement for a century-old seawall on the property, allowing owners to keep the structure in place. Now, Nesbitt is seeking a separate environmental exemption from the local government so his team can restore and expand the seawall. A Native Hawaiian community group is opposing the $3.2 million seawall overhaul, arguing that the construction will harm their local cultural restoration project. For the past two years, they have been rebuilding the walls of a historic turtle pond fronting the property and cultivating seaweed.

But for Kala‘i, the issue is a more personal one.

Among Native Hawaiians, human remains are believed to retain the mana, or essence, of the deceased. That mana connects the dead with those still living and becomes part of the land, physically and spiritually. But for decades, those remains were removed and relocated as real estate interests carved homes and hotels into the coastline.

The issue came to a head in the late 1980s, when developers on Maui began excavating sand dunes at Honokahua Bay to build a Ritz-Carlton resort. More than 1,100 Native Hawaiian burials, believed to date back to the year 850, were unearthed. Native Hawaiians protested, leading to current day laws and policies governing the treatment of iwi kupuna.

In recent years, the discovery of ancient burials has snarled construction of several developments, with some sidelined for years as parties battle over what should happen to the disturbed human remains.

Concerns about iwi kupuna contributed to Honolulu Mayor Kirk Caldwell’s decision this year to scrap a $1.4 million park project just a few miles down the coast from the Nesbitt property at Waimanalo Bay Beach Park.

Before Nesbitt broke ground on the Waimanalo estate, developers conducted surveys required by state law to check for Hawaiian burials. In 2018, they found the remains of a young boy.

Nesbitt’s consultants presented their burial plan to the Oahu Island Burial Council, and Kala‘i asked if she could honor the boy before he was covered back up. At the grave site, she and members of her family offered a pule, or prayer, for their Native Hawaiian ancestor, who long ago had been buried along the coast where local fishing villages once prevailed. After the burial was complete, they placed lei around the grave.

Then, in January, workers found two more sets of human remains as construction began. For months, the bones were stored in what state officials referred to as a “temporary curation facility.” Kala‘i, who visited the iwi kupuna on the property in April, said they were being stored in the bottom drawer of a filing cabinet inside a construction trailer. She said the baskets containing the bones were covered with black mildew.

The bones had been placed there while wet, said Trisha Kehaulani Watson, a consultant for the owners. “That was not the condition they should have been in,” she said. “And I think everyone regrets that.”

Kala‘i, whose former husband and children trace their ancestry to the area, had been urging Nesbitt’s consultants to rebury the bones where they had been found. But that would have required relocating a planned swimming pool, or laying the concrete foundation over the iwi kupuna.

“You don’t just dig them out of the ground and put them in the bottom of a filing cabinet and forget about them,” she told the Oahu Island Burial Council last month. “And then you don’t come to me and ask me to help you figure out the solution and then cut me off and go and pour the fricking concrete in the swimming pool so we cannot put the kupuna back now.”

Watson, Nesbitt’s consultant, said weeks of discussions with Kala‘i to find an agreed upon solution were unsuccessful.

Nesbitt did not address Kala‘i’s claims directly or respond to a question about whether he considered redesigning the pool so that the iwi kupuna could be put back. But he said his team listened to community feedback. 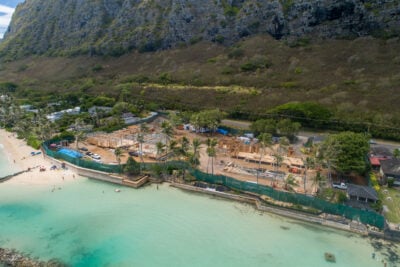 “Certain individuals have lobbied to insert themselves into the process and advocate for their preferences in the treatment of the remains,” he wrote. “This input was appreciated and incorporated as appropriate, and the project proceeded in strict compliance with the law and in cooperation with area practitioners.”

Kukana Kama-Toth, vice chair of the Waimanalo Neighborhood Board, who helped reinter the remains, said they were treated with respect and protocols were followed.

The decision to sign off on the removal of the iwi kupuna from the ground was not an easy one, said Regina Hilo, a burial specialist for the state. While she typically advocates for preserving iwi kupuna in place, in this case, she said the owners were not only planning a pool in the area, but a septic tank for the treatment of the property’s wastewater. That waste then flows out into an underground leach field where it is absorbed into the ground.

“I don’t think keeping kupuna in a situation where they are adjacent to a leach field or a septic system is ever acceptable,” she told the council.

Kala‘i now worries more Native Hawaiian burials will be unearthed, particularly if the owners get permission to break ground on the seawall renovation. In June, the burial council officially recognized her as a cultural descendent of the area, and consultants say she will be notified if any more remains are found.

The chair indicated the iwi kupuna at the Waimanalo estate would be on the agenda again for this month’s meeting on Aug. 26.