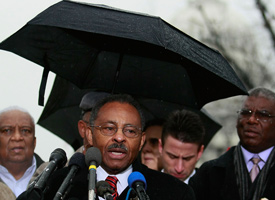 After having his credentials rejected by Capitol Hill officials this morning, Roland Burris is still not a U.S. senator.

Not yet, at least.

"My name is Roland Burris, the junior senator from the state of Illinois," Burris told reporters outside the Capitol. "I was advised that my credentials were not in order."

Senate Democratic leaders said they would block the pick last week after Illinois Gov. Rod Blagojevich tapped Burris to fill Barack Obama's vacant seat, but experts have questioned whether Congress has that legal authority. Burris said he would take the issue to court, where he seems to stand a decent chance.

Burris has already asked the Illinois Supreme Court to confirm his nomination. Burris' lawyers asked the court last week to require Illinois Secretary of State Jesse White "to certify Governor Blagojevich's appointment of Mr. Burris to the office of United States Senator from the state of Illinois and do all other acts required to confirm such appointment."

White refused to sign off on the appointment as soon as it was announced. Whites' refusal allowed the secretary of the Senate to reject Burris' credentials today.

There's also some U.S. Supreme Court precedent on Burris' side. The court once found that the House could not refuse to seat Adam Clayton Powell, who had been accused of financial impropriety, if he met the constitutionally determined qualifications for age, citizenship and residency.

The Senate has rarely denied seats to candidates, and even then, only to those whose election outcome was in doubt or who were accused of corruption. But neither of those applies to Burris.

And Blagojevich still has the sole power to make the appointment as long as he has not been removed from office.

ProPublica reported last week that Burris' long career in Illinois politics (he was comptroller, then attorney general) has not been free from controversy.

While attorney general in 1992, Burris aggressively sought the death penalty for Rolando Cruz, who had been convicted of raping and murdering a 10-year-old girl. Burris ignored another man's confession to the crime and pleas from his own assistant attorney general to drop the case.

Since leaving office, Burris has been a state lobbyist and a consistent donor to Blagojevich's campaigns.

We'll stay on "Burris Watch" and report back when we know more.