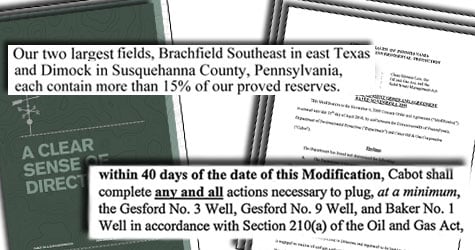 More than 15 months after natural gas drilling contaminated drinking water in Dimock, Pa., state officials are ordering the company responsible -- Houston-based Cabot Oil and Gas -- to permanently shut down some of its wells, pay nearly a quarter million dollars in fines, and permanently provide drinking water to 14 affected families.

The order is among the most punitive in Pennsylvania's history and reflects officials' frustrations over a string of drilling-related accidents. The record of spills, leaks and water contamination in Pennsylvania -- several of which are tied to Cabot -- has spotlighted the environmental risks of drilling for natural gas across the country, jeopardized development of the massive Marcellus Shale resource deposit, and contributed significantly to actions by both Congress and the U.S. Environmental Protection Agency to bolster federal oversight of drilling.

"The events at Dimock have been the black eye for the industry and have also been a black eye for Pennsylvania," the state's chief environment official, John Hanger, told ProPublica. "It's been an enormous headache. If Cabot doesn't get this message, the company has got an amazing hearing problem."

ProPublica was among the first to report about the water contamination problems in Dimock -- and about more than 50 other similar cases that have emerged as drilling development has spread across the state -- in an article published last April that was part of a series about drilling concerns across the country. Since then the state Department of Environmental Protection has more than doubled its enforcement staff, and legislation has been introduced to revise Pennsylvania's rules for drilling and strengthen protections for groundwater.

Cabot did not respond to a request for comment. In a statement Thursday, Cabot Oil and Gas said that it agreed to the DEP's measures and that the state's order represents "a continuing joint effort by Cabot and the PADEP to ensure the safety of people, water resources and the environment of Susquehanna County."

DEP officials determined last fall that methane gas and drilling waste had leaked through cracked underground casing on Cabot's gas wells and seeped into drinking water in the Dimock area. They fined the company, which is also being sued by a group of area residents, $120,000 at the time. In its most recent order, which is an update of that 2009 action, the Department of Environmental Protection expressed frustration with Cabot's failure to address the contamination and said it found gas bubbling up in well water as recently as March, even though the company had submitted a plan to fix it last November.

On Thursday, the DEP gave Cabot -- which Hanger described as one of "the worst" oil and gas operators he has seen -- 40 days to plug the three wells it believes are responsible, and threatened that Cabot would have to plug more if the problems didn't subside. It gave the company a month to install permanent water treatment systems in 14 homes where water was found to contain high levels of methane, iron and other metals, and where residents have complained of headaches, skin rashes and sick animals. In addition, it ordered Cabot to pay a $240,000 fine, plus $30,000 for each month in which it fails to fix the problems.

The DEP is also suspending its review of Cabot's pending applications for new drilling permits across the state and won't allow the company to drill any new wells at all in the Dimock area -- even those already permitted -- for 12 months. It said it will continue to investigate 10 more Cabot wells near Dimock and could order some of them plugged as well.

The Dimock gas wells are among the most important for Cabot Oil and Gas, a $4.2 billion publicly traded corporation. According to Cabot's 2009 annual report, the Dimock field accounts for 15 percent of the corporation's gas assets and is its second largest development area, after a region in Texas. At current prices the Dimock wells produced $55 million worth of natural gas last year. Much of the company's growth is tied to its plans for expansion in Pennsylvania's part of the Marcellus Shale. It planned to drill 100 new wells in the Dimock area in 2010.

Cabot CEO Dan Dinges, however, promised the enforcement action would "not impact the number of wells scheduled to be drilled under Cabot's 2010 drilling effort, nor will it impact our production guidance," according to the company's statement.