This story was co-produced with KQED's The California Report. Listen to it here. 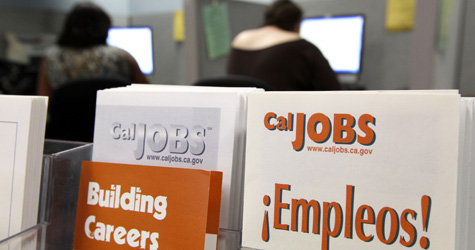 Seventeen states have been forced to borrow federal money because their unemployment insurance trust funds have run dry — but even among this group one state stands out from the rest.

California, which now owes $2.6 billion, has the most indebted trust fund in the nation. For the last month, the state has been borrowing at a rate of about $30 million per day. 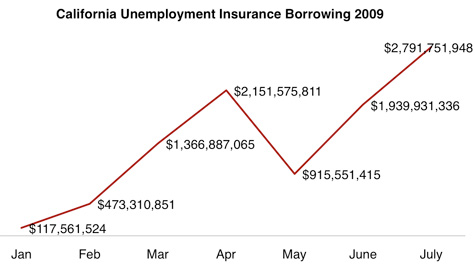 State workforce department officials estimate that by the end of 2010, the state’s fund will owe a jaw-dropping $18 billion.

A historical compromise left the U.S. with a patchwork system of 53 different trust funds operated by states and territories, which are able to decide their levels of financing and benefits provided they comply with federal guidelines that have not been updated for more than 25 years. The result is a system where some states have ample funds for unemployment insurance, and some run out. Workers in the most generous states get benefits twice as high as those in the stingiest states.

As is the case with most of the other states whose trust funds are empty, the funds coming into California’s trust fund have barely kept pace with the money being paid out in benefits. In times of recession, unemployment benefits function both as a helping hand for workers in need and an automatic form of economic stimulus by keeping people spending and businesses open.

When the unemployment insurance system was created, the intent was for states to accumulate reserves during good years and then let that money flow into the economy to ease economic rough patches.

Instead, as we reported earlier this year, many states let their reserves dwindle to nothing and have been forced to either cut benefits or raise taxes at the worst possible time—the middle of a deep recession.

Ever since then, the state has barely been able to break even, let alone accumulate trust fund reserves required to weather a recession like the current one. Even in 2004, a relatively good year, the state found itself borrowing federal funds.

The stimulus bill provides for interest-free loans to states until 2011, but if California can’t pay off the bulk of its loans before then, it faces interest bills of more than $500 million per year. And according to federal borrowing rules, that money must come out of the state’s general fund, which means less money for other priorities.

The legislature is debating several proposals to stop the bleeding, including a provision similar to other states’ that would automatically adjust tax revenue upward as wages increase, thus ensuring sufficient funding each year with no need for the legislature to take action.

But all of the proposals yield to harsh economic reality: For the trust fund to regain solvency, businesses will have to pay higher tax rates, and benefits may have to be cut.