The chair of New York City’s Civilian Complaint Review Board is calling for a fundamental shift in how NYPD officers are disciplined for abuse of civilians.

The Rev. Fred Davie, who has led the board since April 2018, said last week the police commissioner should no longer be the final arbiter of discipline in cases investigated by the CCRB.

“I’ll go where others dare not tread and hope I still have my position tomorrow morning,” Davie said on Dec. 16 during a public event convened by his agency to discuss civilian oversight. “I would say we really need to look at final authority.”

Echoing sentiments he tweeted the week before, Davie went on to say that the Police Department should be “required to adhere” to disciplinary recommendations made by the CCRB in cases under the agency’s jurisdiction, which covers unnecessary or excessive force, abuse of authority, discourtesy and offensive language.

As ProPublica has detailed, NYPD commissioners have used their authority to overturn not only the CCRB’s recommendations for punishments but also rulings by department hearing officers (often referred to internally as judges) and even guilty pleas agreed to by police officers. Officers have also been promoted to senior positions in the NYPD despite lengthy records of civilian complaints alleging misconduct.

Davie is far from alone in wanting to see a change in the police commissioner’s disciplinary authority, as pressure has increased on the NYPD to reform.

On Friday, the city’s Department of Investigation released a report critical of the NYPD’s response to this summer’s protests against police brutality. The report recommended that policymakers revisit the police commissioner’s absolute authority over discipline. The report also noted that the NYPD has often been uncooperative in providing records to the CCRB and other oversight agencies, an issue ProPublica recently detailed.

At least five New York City Council members are working on legislation that would shift final authority on discipline away from the commissioner. In one approach, which would require voter approval, the CCRB would become an elected board with the power to make binding disciplinary decisions. The current board, which can only make recommendations on discipline, consists of 15 members, with the City Council, mayor, public advocate and police commissioner each accorded appointments, and the mayor and City Council speaker jointly picking the chair. The board oversees a staff of about 200 people, including investigators, mediators, case managers and lawyers.

“We want the [disciplinary] authority to rest with the residents who are in these communities, and who unfortunately have been subjected to numerous complaints of police misconduct and brutality,” said council member Inez Barron, who is sponsoring the legislation that would make the CCRB an elected body.

Other legislation being discussed would focus specifically on removing the commissioner’s final disciplinary authority, without restructuring the CCRB.

“It’s a foundational concept,” said council member Stephen Levin, who is working on the narrower legislation. “If you mess up, you should be held accountable. It shouldn’t be complicated.”

The NYPD did not respond to a request for comment on the report but has previously said in a statement that the current system gives the commissioner “wide latitude for rapid accountability” and is “fair and effective.” 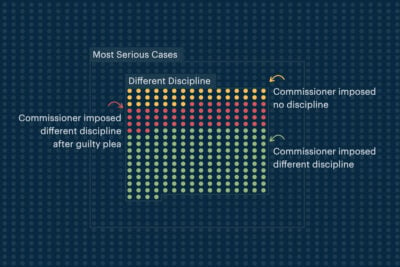 While a civilian board can prosecute misconduct cases involving NYPD officers, the police commissioner has the final word. Frequently, that power is used to reduce penalties.

Currently, the only check on the commissioner’s disciplinary authority is the mayor, who has the power to hire and fire the commissioner. Mayor Bill de Blasio, who has been criticized for the wide berth he has given his current commissioner, Dermot Shea, said he “agreed” with the findings and recommendations of the new report on the NYPD’s handling of the protests.

Any rollback of the police commissioner’s authority would face obstacles. Many of the rules on discipline of officers and other public safety workers are rooted in state law, and changes sought by the city may need approval from the state legislature, where police unions have long had considerable influence.

In Rochester, New York, which tried creating an elected civilian oversight board with greater authority, the local police union is fighting the change in state court. The leader of New York City’s largest police union has made clear he believes disciplinary authority needs to remain with the commissioner.

For some advocates, a change to disciplinary authority would not go far enough in increasing accountability.

“While it’s important that CCRB be able to issue binding disciplinary findings, there’s no magic legislative remedy — reducing police violence and timely firings of abusive officers will not happen in NYC until the budget, size, scope and power of the NYPD and police unions is significantly reduced,” said Joo-Hyun Kang, director of Communities United for Police Reform.

The change suggested by the CCRB chair and others would be novel. Most police oversight agencies do not have the “authority to make final determinations as to the outcome of an investigation,” according to the National Association for Civilian Oversight of Law Enforcement.

Police reform in New York City is already an issue in the 2021 mayoral race. To date, 31 candidates are registered to run for the position that appoints the police commissioner. Mayoral candidates include a former NYPD captain, a former chair of the CCRB and the city’s current comptroller, Scott Stringer. In a recent op-ed, Stringer called for a series of changes to NYPD oversight. Among them: stripping the police commissioner of final disciplinary authority.