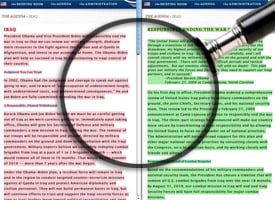 We're proud to accept a Special Distinction Award from the Knight-Batten Award for Innovations in Journalism for our ChangeTracker application. The awards were created to honor creative uses of new technologies that would showcase compelling models for the future of news and help engage citizens in public issues. "The Knight-Batten Award honors excellent, innovative journalism, news and information -- not just excellent journalism," said Gary Kebbel, journalism program director for the John S. and James L. Knight Foundation. The award comes with $1,000.

ProPublica created the ChangeTracker tool to allow people to monitor changes made to the WhiteHouse.gov Web site by showing exactly what was removed, edited or updated, with side-by-side comparisons before and after changes were made. With ChangeTracker, anybody can create a tracker to follow any Web site. So a City Hall reporter who wants to watch for updates on the local mayor or city council member's Web site can follow our recipe to build a ChangeTracker and point it at the site to be notified of updates.