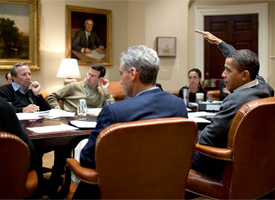 By law, federal employees in the executive branch can't participate in specific government decisions in which they have a substantial personal or financial stake. President Barack Obama is holding his team to even higher expectations that some good-governance experts have said are so strict they are obstructing his efforts to fill empty seats in the administration.

To join the team, appointees are required to write personalized letters promising to live up to these tough standards. We at ProPublica received from the White House the ethics promises of the first wave of Obama appointees. And we're sharing them with you.

In the letters, officials promise to comply with specific government ethics laws and regulations, and list their conflicts of interest, past and present. These can include anything from a spouse's job to the family farm.

We've looked through the letters, and while there are a quite a few interesting conflicts, we haven't come across any previously unreported significant conflicts. But don't take our word for it. Help us check what the officials are pledging. Here are all the documents.

The disclosure letters will also give you insight into how the White House defines and polices conflicts of interest. Here are some examples of the curious tidbits we've already gleaned:

Again, here are all the documents. Use our comment section to discuss your findings and tip us off to any big surprises, or shoot us an e-mail.

And, if rummaging through financial disclosure forms suits you, send a note to our editor of distributed reporting, Amanda Michel, at [email protected].

ProPublica's Olga Pierce -- who's on vacation this week -- originally requested and wrangled the documents.

Update: We tweaked this post slightly to better reflect the intricacies of the law.