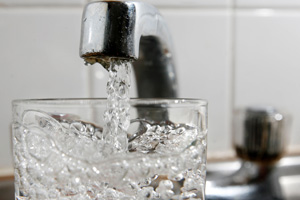 The New York Times' latest story in its series on water contamination might make you think twice before filling up your glass from the tap. Although the law probably deems your water safe, it could still be -- legally -- teeming with chemicals that cause health problems "from upset stomachs to cancer and birth defects."

The Safe Drinking Water Act, which regulates tap water, is dangerously out of date, according to the Times. The list of chemicals it regulates stalled at 91 in 2000 -- even though water pollution has picked up since then and hundreds of chemicals have been associated with a risk of cancer when found in drinking water. Efforts to tighten water standards have been thwarted by industry lobbyists, according to the Times.

[T]he drinking water standard for arsenic, a naturally occurring chemical used in semiconductor manufacturing and treated wood, is at a level where a community could drink perfectly legal water, and roughly one in every 600 residents would likely develop bladder cancer over their lifetimes, according to studies commissioned by the E.P.A.

The EPA, which has ultimate responsibility for the Safe Drinking Water Act, said that a better law was needed to "assure the public that any unacceptable risks have been eliminated." Administrator Lisa Jackson has, according to the Times, "asked Congress to amend laws governing how the E.P.A. assesses chemicals, and has issued policies to insulate the agency's scientific reviews from outside pressures."

The Senate Environment and Public Works Committee passed an act in May that would authorize $14.7 billion in loans to help states improve their water systems. In the meantime, however, millions of Americans get sick each year from drinking contaminated water, according to independent scientific studies.