A federal lawsuit filed Wednesday by the Cook County public guardian alleged that children as young as 7 were sexually abused, while others were injected with sedatives to control them and physically attacked, at a Chicago psychiatric hospital. Child welfare officials, meanwhile, allegedly worked with the hospital to cover up the abuse.

Charles Golbert, the Cook County public guardian, filed the lawsuit on behalf of seven children who are in the care of the Illinois Department of Children and Family Services and who had been involuntarily admitted to Chicago Lakeshore Hospital in 2017 and 2018.

“These kids are entitled to justice for what happened to them at this facility,” Golbert said in an interview Wednesday. “DCFS knew perfectly well about all of the problems and dangers at this hospital.”

He added that he hoped the lawsuit sent a strong message to DCFS: “You cannot keep kids at placements once you know the placement is dangerous.”

ProPublica Illinois and the Chicago Tribune in separate investigations last year revealed numerous allegations of sexual abuse, assault and patient safety violations at the hospital. In response, state lawmakers and the American Civil Liberties Union of Illinois, which monitors DCFS as part of a federal consent decree, demanded the agency take action.

DCFS’ acting inspector general had previously raised concerns with the agency about the safety of children at Lakeshore. The ACLU took DCFS to federal court following the news reports, and late last year the agency agreed to stop sending its children to the hospital and removed those who remained there.

“We support this effort to hold responsible those who have done harm to children in the care of DCFS,” the ACLU’s Heidi Dalenberg said on Wednesday.

Chicago Lakeshore Hospital CEO Patricia McClure-Chessier said in a statement that officials “have always placed the health and safety of the children we treat as our top priority.” She said it was “tragic” that Golbert chose to “malign health care providers instead of addressing the root of this statewide crisis: a lack of state funding which prevents children from getting appropriate care at the right time and in the right place.”

She said she will “vigorously defend Chicago Lakeshore Hospital using facts rather than the egregious distortion that has been portrayed before the press.”

DCFS takes allegations of abuse seriously and has not allowed children to be placed at Lakeshore this year, spokesman Jassen Strokosch said in a statement. He said the agency, which has a new acting director, has hired more than 300 employees since April and has “begun to make dramatic improvements to overcome the challenges that have plagued the department for decades.”

“DCFS is committed to protecting the children of Illinois and providing the best possible services to the children in our care,” Strokosch said.

The lawsuit detailed abuse at the hands of employees and other patients, alleging children found themselves at a “hospital of horrors” instead of a safe environment where they could focus on their treatment. 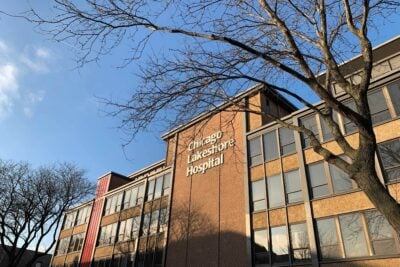 Lawyers for Aurora Chicago Lakeshore Hospital had asked a judge for an order so it wouldn’t immediately lose federal funding and have to close.

One 14-year-old girl, according to the lawsuit, was allegedly sexually assaulted multiple times by a nurse who showed her pornographic videos as well as allowed her and others to fill out their own medical paperwork and to use the nurse’s vaping device. The girl and others reportedly escaped from the hospital and were missing for several months.

That nurse, according to the lawsuit, was charged this year with attempted murder in an incident involving her housemate. Her nursing license was revoked.

The lawsuit also claims a male hospital employee entered the room of a 12-year-old girl and forced her hand on his genitals and grabbed her breasts. A 7-year-old boy was allegedly forced to perform oral sex on his older roomate, who had previously physically abused him. And the hospital didn’t put precautions in place to protect an 8-year-old girl who also was sexually assaulted by a peer, the lawsuit alleges, despite the hospital knowing the boy had previously sexually assaulted his roommate.

The lawsuit, which seeks monetary compensation for the children, alleges that DCFS relied so heavily on Lakeshore because it “had worn out its welcome” at other psychiatric hospitals in the Chicago area. Psychiatric hospitals were reluctant to admit DCFS children because state budgetary constraints delayed payments to them, and DCFS routinely kept children in psychiatric hospitals after they had been medically cleared for discharge, according to the lawsuit.

In June 2018, ProPublica Illinois first reported on children trapped in psychiatric hospitals because DCFS struggled to find them appropriate placements. Golbert filed a lawsuit last December on behalf of the hundreds of children who remained in psychiatric hospitals after being cleared for release. That lawsuit is pending. DCFS said at the time that finding appropriate placement for children is challenging and that the agency was working to reduce the need for hospitalization and build up additional places for children.

DCFS’ desperation for a psychiatric hospital that would accept its children led agency officials and Lakeshore to engage in “concerted efforts to cover-up or discredit the allegations of abuse,” according to the lawsuit, which also alleged the hospital failed to repair broken video cameras and destroyed existing video in an attempt to hide evidence that could corroborate the allegations.

The lawsuit names Lakeshore, its owner Signature Healthcare Services, former hospital CEO David Fletcher-Janzen, a number of hospital employees who worked there at the time of the allegations and several DCFS officials, including former department chief Beverly “B.J.” Walker.

Last December, the hospital was days away from losing federal funding. Officials said they would terminate Lakeshore’s Medicare agreement because the hospital could not ensure its patients were free from sexual and physical abuse and it did not have sufficient policies to investigate the allegations.

One year later, the hospital finds itself in a similar position. Federal officials notified Lakeshore that they plan to terminate its Medicare agreement on Monday, the latest deadline in a long list of dates that have been extended. The hospital has filed temporary restraining orders and preliminary injunctions in federal court to fight the termination. Lakeshore officials have said losing the federal funding could force the hospital to shut down.

An inspection last month by the Illinois Department of Public Health on behalf of the Centers for Medicare and Medicaid Services found deficiencies that “immediately jeopardize the health and safety of its patients,” federal officials wrote in a letter to the hospital.

In her statement, McClure-Chessier said Chicago Lakeshore Hospital “has always cooperated with regulators in a transparent way and we work diligently to correct any problems that arise while treating the most difficult and troubled populations — populations other hospitals cannot or will not treat because of acuity or inadequate reimbursement.”