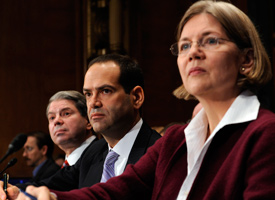 Two top watchdogs over the government's financial rescue programs told senators Thursday they would examine how two troubled banks, Citigroup and Bank of America, were included in the first round of the bailout intended for "healthy banks."

The assurances from Gene Dodaro, the acting comptroller general, and Neil Barofsky, special inspector general for the Troubled Asset Relief Program, came during a hearing at which senators from both parties expressed concern about how the banks qualified for billions in bailout funding.

Sen. Chris Dodd (D-CT), chairman of the Senate Banking, Housing and Urban Affairs Committee, wanted to know why the selection process last October that resulted in the two banks receiving $40 billion in federal funds -- $25 billion for Citigroup and $15 billion for Bank of America -- was "completely shrouded."

Richard Shelby, the panel's ranking Republican, said it appeared that "the (Federal Reserve Board) and Treasury didn't know what they were doing" when they agreed to inject money into nine "healthy banks," because Bank of America and Citigroup were "on the brink of collapse" and another, Merrill Lynch, was being bought by BofA.

Citigroup and Bank of America started out as recipients of huge government investments through the Capital Purchase Program, designed for healthy banks. A few weeks later, Treasury and the Fed set up two new TARP programs for troubled firms, the Targeted Investment Program and the Asset Guarantee Program. The programs were first set up for Citigroup; Bank of America followed as the second recipient.

The three witnesses at the hearing, all involved in overseeing the TARP program, agreed with the concerns of the senators and announced new plans to review the process.

Dodaro, the acting comptroller general, said his agency, the Government Accountability Office, intends to "look at the decision-making process" for the Capital Purchase Program.

Barofsky, the special inspector general for the TARP, said he was launching an audit of Bank of America's involvement in the TARP "precisely because" it wound up in the three different programs. Barofsky has also coordinated with the inspectors general of bank supervisory agencies to ensure that they audit the role of their organizations in reviewing applications for the CPP. (Under the CPP, banking organizations are supposed to first apply to their federal supervisors, who review the application to see if they qualify for the program.)

"Were similar banks all treated the same?" is an over-arching question the audits seek to answer, Barofsky told the panel.

Elizabeth Warren, the chair of the Congressional Oversight Panel for the TARP, which had previously issued reports questioning Citigroup's inclusion in the CPP, said that former Treasury Secretary Henry Paulson had been "not entirely candid" when he told the public that Treasury was injecting money into healthy banks.

Paulson's successor, Timothy Geithner, appears before the banking committee next week. He promised, as part of his confirmation, to answer questions about the criteria for selecting TARP recipients.