Two weeks after Edward Snowden’s first revelations about sweeping government surveillance, President Obama shot back. “We know of at least 50 threats that have been averted because of this information not just in the United States, but, in some cases, threats here in Germany,” Obama said during a visit to Berlin in June. “So lives have been saved.”

In the months since, intelligence officials, media outlets, and members of Congress from both parties all repeated versions of the claim that NSA surveillance has stopped more than 50 terrorist attacks. The figure has become a key talking point in the debate around the spying programs.

Interactive: How the NSA’s Claim on Thwarted Terrorist Plots Has Spread 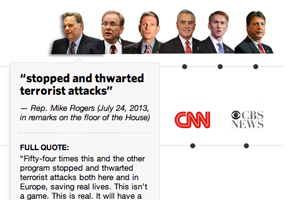 “Fifty-four times this and the other program stopped and thwarted terrorist attacks both here and in Europe — saving real lives,” Rep. Mike Rogers, a Michigan Republican who chairs the House Intelligence Committee, said on the House floor in July, referring to programs authorized by a pair of post-9/11 laws. “This isn’t a game. This is real.”

But there's no evidence that the oft-cited figure is accurate.

The NSA itself has been inconsistent on how many plots it has helped prevent and what role the surveillance programs played. The agency has often made hedged statements that avoid any sweeping assertions about attacks thwarted.

A chart declassified by the agency in July, for example, says that intelligence from the programs on 54 occasions “has contributed to the [U.S. government’s] understanding of terrorism activities and, in many cases, has enabled the disruption of potential terrorist events at home and abroad” — a much different claim than asserting that the programs have been responsible for thwarting 54 attacks.

NSA officials have mostly repeated versions of this wording.

When NSA chief Gen. Keith Alexander spoke at a Las Vegas security conference in July, for instance, he referred to “54 different terrorist-related activities,” 42 of which were plots and 12 of which were cases in which individuals provided “material support” to terrorism.

But the NSA has not always been so careful.

During Alexander’s speech in Las Vegas, a slide in an accompanying slideshow read simply “54 ATTACKS THWARTED.”

And in a recent letter to NSA employees, Alexander and John Inglis, the NSA’s deputy director, wrote that the agency has “contributed to keeping the U.S. and its allies safe from 54 terrorist plots.” (The letter was obtained by reporter Kevin Gosztola from a source with ties to the intelligence community. The NSA did not respond when asked to authenticate it.)

Asked for clarification of the surveillance programs' record, the NSA declined to comment.

“Would you agree that the 54 cases that keep getting cited by the administration were not all plots, and of the 54, only 13 had some nexus to the U.S.?” Leahy said at the hearing. “Would you agree with that, yes or no?”

It's impossible to assess the role NSA surveillance played in the 54 cases because, while the agency has provided a full list to Congress, it remains classified.

Officials have openly discussed only a few of the cases (see below), and the agency has identified only one — involving a San Diego man convicted of sending $8,500 to Somalia to support the militant group Al Shabab — in which NSA surveillance played a dominant role.

The surveillance programs at issue fall into two categories: The collection of metadata on all American phone calls under the Patriot Act, and the snooping of electronic communications targeted at foreigners under a 2007 surveillance law. Alexander has said that surveillance authorized by the latter law provided “the initial tip” in roughly half of the 54 cases. The NSA has not released examples of such cases.

After reading the full classified list, Leahy concluded the NSA’s surveillance has some value but still questioned the agency’s figures.

“We've heard over and over again the assertion that 54 terrorist plots were thwarted ... That's plainly wrong, but we still get it in letters to members of Congress, we get it in statements.”

“We've heard over and over again the assertion that 54 terrorist plots were thwarted” by the two programs, Leahy told Alexander at the Judiciary Committee hearing this month. “That's plainly wrong, but we still get it in letters to members of Congress, we get it in statements. These weren't all plots and they weren't all thwarted. The American people are getting left with the inaccurate impression of the effectiveness of NSA programs.”

The origins of the “54” figure go back to a House Intelligence Committee hearing on June 18, less than two weeks after the Guardian’s publication of the first story based on documents leaked by Snowden.

At that hearing, Alexander said, “The information gathered from these programs provided the U.S. government with critical leads to help prevent over 50 potential terrorist events in more than 20 countries around the world.” He didn’t specify what “events” meant. Pressed by Rep. Jim Himes, D-Conn., Alexander said the NSA would send a more detailed breakdown to the committee.

Speaking in Baltimore the next week, Alexander gave an exact figure: 54 cases “in which these programs contributed to our understanding, and in many cases, helped enable the disruption of terrorist plots in the U.S. and in over 20 countries throughout the world.”

But members of Congress have repeatedly ignored the distinctions and hedges.

The websites of the Republicans and Democrats on the House Intelligence Committee include pages titled, “54 Attacks in 20 Countries Thwarted By NSA Collection.”

And individual congressmen have frequently cited the figure in debates around NSA surveillance.

Wenstrup, Heck and Lankford did not respond to requests for comment.

The claims have also appeared in the media. ABC News, CNN and the New York Times have all repeated versions of the claim that more than 50 plots have been thwarted by the programs.

The NSA has publicly identified four of the 54 cases. They are:

For more from ProPublica on the NSA, read about the agency's campaign to crack Internet security, a look at the surveillance reforms Obama supported before he was president, and a fact-check on claims about the NSA and Sept. 11.