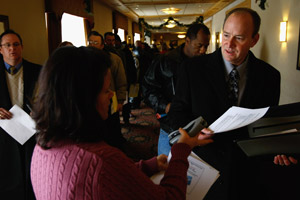 Next to global domination, our top goal with our new unemployment tracker was to create an ongoing resource to usefully pull together all the most recent data on unemployment insurance trust funds. So far, mission accomplished: our first update has taken place, and the tracker now features newly released data on trust fund balances, state unemployment insurance tax revenues and benefits paid out. (To the mathletes who loved our "Nerd Page": This is all you're getting for Valentine’s Day.)

As we've mentioned in our previous coverage, there are 53 separate state unemployment insurance systems (the states, D.C., Puerto Rico and Virgin Islands). With limited federal oversight, they have been relatively free to determine how well financed their systems would be, and how generous the benefits.

While some states had socked away ample reserves in their trust funds, others let theirs dwindle to dangerously low levels before the Great Recession even began. In our coverage last week, we highlighted the 25 states who were forced to begin borrowing money from the federal government just to keep unemployment benefits flowing.

We also predicted that nine more states would begin borrowing within the next six months, and so far our record is two for two: