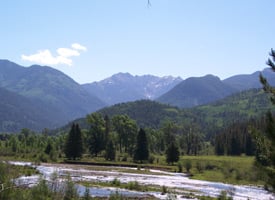 At least one 11th hour regulation by the Bush administration has had its momentum slowed. In response to a request by Colorado, the Department of Agriculture will delay implementing a rule that would have allowed more road-building in wilderness areas in the West.

The decision follows on the heels of one in a long series of court opinions that attempts to bring clarity to the scope of the Clinton administration's roadless rule after the Bush rule was overturned in 2006. This decision, issued by a San Francisco judge, reduced the number of states protected by the Clinton's rule. Colorado was one of the states affected, which has created a sense of urgency to implement a rule that will not be problematic.

In a letter to the U.S. Forest Service, Harris Sherman, executive director of Colorado's Department of Natural Resources, said they needed more time to work with the various groups affected by and concerned with the proposed rule. "We believe it is critical that we get the proposed rule right, to avoid further wrangling," he wrote.

It is likely now that the rule will be finalized three to six months into the Obama administration.