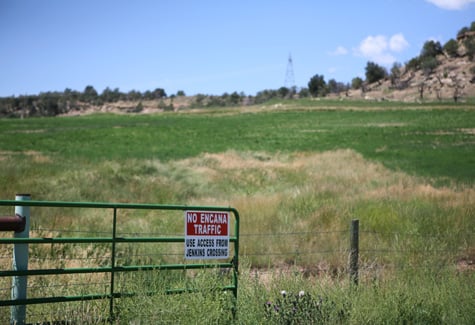 Jesse Ellsworth thought something was wrong with his water when it began to smell funny and popped out of his faucet in bursts. Then, in February, the Fort Lupton resident launched an experiment: he flipped on the kitchen tap and took a cigarette lighter to the stream. As flint sparked steel, the water lit on fire like a torch.

Ellsworth is one of at least 29 residents in small farming communities northeast of Denver who have asked either the energy companies or the Colorado Oil and Gas Conservation Commission to test for natural gas in their water wells.

Now the commission is trying to figure out how the gas got there. Are some of Weld County's 13,957 gas wells leaking methane into drinking water? Or is methane seeping into the water naturally, as it has done from time to time over the years?

So far, officials have determined that at least nine of those contamination cases are not drilling-related; they are likely the result of a water well intersecting with gas underground. But the Ellsworth's well -- which has stronger evidence tying it to drilling -- remains a mystery.

"This one I think is best characterized as an isolated circumstance," said David Neslin, director of the COGCC, "We can't, sitting here today, say 'Yes" that this is coming from somebody's gas well."

While the search for clues continues in Weld County, investigations about methane contamination in Garfield County and other parts of the country have clearly tied the contamination to energy development, strengthening arguments across the country that drilling can put drinking water at risk.

Near Cleveland, Ohio, a house exploded in late 2007 after gas seeped into its water well. The Ohio Department of Natural Resources later issued a 153-page report that blamed a nearby gas well's faulty cement casing and hydraulic fracturing -- a deep-drilling process that shoots millions of gallons of water, sand and chemicals into the ground under explosive pressure -- for pushing methane into an aquifer and causing the explosion.

In Dimock, Pa., where drilling recently began in the mammoth Marcellus shale deposit, several drinking water wells have exploded and nine others were found with so much gas that one homeowner was told to open a window if he planned to take a bath. In February, the Pennsylvania Department of Environmental Protection charged Cabot Oil & Gas with two violations that it says caused the contamination, theorizing that gas leaked from the well casing into fractures underground.

Industry representatives say methane contamination incidents are statistically insignificant, considering that 452,000 wells produced gas in the United States last year. They point out that methane doesn't necessarily come from gas wells -- it's common in nature and can leak into water from biological processes near the surface, like rotting plants.

The industry also defends its construction technology, saying it keeps gas and drilling fluids -- including any chemicals used for hydraulic fracturing -- safely trapped in layers of steel and concrete. Even if some escapes, they say, thousands of feet of rock make it almost impossible for it to migrate into drinking water aquifers. When an accident happens, the blame can usually be traced to a lone bad apple -- some contractor who didn't follow regulations, they say. Those arguments helped the gas drilling industry win rare exemptions from the Safe Drinking Water Act and the Clean Water Act when Congress enacted the 2005 Energy Policy Act.

Now an exhaustive examination of a methane problem on Colorado's Western Slope is offering a strong scientific repudiation of that argument. Released in December by Garfield County, the report concludes that gas drilling has degraded water in dozens of water wells.

The three-year study used sophisticated scientific techniques to match methane from water to the same rock layer -- a mile and a half underground - where gas companies are drilling. The scientists didn't determine which gas wells caused the problem or say exactly how the gas reached the water, but they indicated with more clarity than ever before that a system of interconnected natural fractures and faults could stretch from deep underground gas layers to the surface. They called for more research into how the industry's practice of forcefully fracturing those deep layers might increase the risk of contaminants making their way up into an aquifer.

"It challenges the view that natural gas, and the suite of hydrocarbons that exist around it, is isolated from water supplies by its extreme depth," said Judith Jordan, the oil and gas liaison for Garfield County who has worked as a hydrogeologist with DuPont and as a lawyer with Pennsylvania's Department of Environmental Protection. "It is highly unlikely that methane would have migrated through natural faults and fractures and coincidentally arrived in domestic wells at the same time oil and gas development started, after having been down there ...for over 65 million years."

The Garfield County analysis comes as Congress considers legislation that would toughen environmental oversight of drilling and reverse the exemptions enjoyed by the gas companies. Colorado has already overhauled its own oil and gas regulations, despite stiff resistance from the energy industry. The new rules, which went into effect earlier this month, strengthen protections against, among other things, methane contamination.

Drinking water with methane, the largest component of natural gas, isn't necessarily harmful. The gas itself isn't toxic -- the Environmental Protection Agency doesn't even regulate it -- and it escapes from water quickly, like bubbles in a soda.

But the gas becomes dangerous when it evaporates out of the water and into peoples' homes, where it can become flammable. It can also suffocate those who breathe it. According to the Agency for Toxic Substances and Disease Registry, a part of the U.S. Department of Health and Human Services, as the concentration of gas increases it can cause headaches, then nausea, brain damage and eventually death.

The Garfield County report is significant because it is among the first to broadly analyze the ability of methane and other contaminants to migrate underground in drilling areas, and to find that such contamination was in fact occurring. It examined over 700 methane samples from 292 locations and found that methane, as well as wastewater from the drilling, was making its way into drinking water not as a result of a single accident but on a broader basis.

As the number of gas wells in the area increased from 200 to 1,300 in this decade, methane levels in nearby water wells increased too. The study found that natural faults and fractures exist in underground formations in Colorado, and that it may be possible for contaminants to travel through them.

Conditions that could be responsible include "vertical upward flow" "along natural open-fracture pathways or pathways such as well-bores or hydraulically-opened fractures," states the section of the report done by S.S. Papadopulos and Associates, a Maryland-based environmental engineering firm specializing in groundwater hydrology.

The researchers did not conclude that gas and fluids were migrating directly from the deep pockets of gas the industry was extracting. In fact, they said it was more likely that the gas originated from a weakness somewhere along the well's structure. But the discovery of so much natural fracturing, combined with fractures made by the drilling process, raises questions about how all those cracks interact with the well bore and whether they could be exacerbating the groundwater contamination.

"One thing that is most striking is in the area where there are large vertical faults you see a much higher instance of water wells being affected," said Geoffrey Thyne, the hydrogeologist who wrote the report's summary and conclusion. He is a senior research scientist at the University of Wyoming's Enhanced Oil Recovery Institute, a pro-extraction group dedicated to tapping into hard-to-reach energy reserves.

The report, referred to as the Garfield County Hydrogeologic Study, has been met with cautious silence by the industry and by its regulators.

The Colorado Oil and Gas Conservation Commission, the state's regulatory body, would not respond to questions from ProPublica because it hasn't thoroughly analyzed the data behind the November report, said its acting director, David Neslin.

Neither the Colorado Oil and Gas Association nor Encana, the Canadian energy company that drills in the study area, would comment on the Garfield County report. Both referred questions to Anthony Gorody, a Houston-based geochemist who specializes in oil and gas issues and frequently is employed by the energy industry.

"This is so out of whack. There are a handful of wells that have problems. These are rare events," said Gorody, president of Universal Geosciences Consulting. "They are like plane crashes -- the extent tends to be fairly limited. I do not see any pervasive impact."

Most of the methane in the study area, Gorody said, came from shallow gas-bearing rock or decaying matter near the surface -- not from the deep gas produced by the energy industry. He criticized the report's methodology, saying the way that researchers linked the stray gas with the deep gas formations was speculative at best.

Thyne, standing by his report, said researchers had traced the origin of the gas by conducting the equivalent of a forensic investigation, analyzing its isotopic signature, or molecular fingerprint. The molecular structure showed that most of it was thermogenic, meaning it matched the deeply buried deposit where gas was being drilled, called the Williams Fork Formation. A minority of the samples were difficult to identify by this method, so Thyne used another scientific process to study them. He is confident they, too, were thermogenic in origin.

In most cases, the study couldn't pinpoint the exact pathway the contaminants had used to travel a mile and a half up into the drinking water aquifer. So Thyne could only reason the possibilities.

The methane could be seeping into water wells through natural fractures, he said, or through leaks in the well casings or cement, or from the well heads.

When a pipe extends 8,000 feet below the earth's surface, he said, "there are numerous potential leak points along the way. So is it leaking at 8,000 feet and coming up a well bore, a natural fault or fracture? Or is it leaking 500 feet from the surface? We don't know."

The most plausible explanation, Thyne said, is that the same type of well casing and cementing issues that had proved problematic in Ohio and are suspected in Pennsylvania were presenting problems in Colorado too.

"The thesis is that because of the way the wells are designed they could be a conduit," said Garfield County's Jordan, who commissioned the report.

Jordan worries that the methane leaks could be a sign of worse to come.

"We suspect the methane would be the most mobile constituent that would come out of the gas fields. Our concern is that it's a sort of sentinel, and there are going to be worse contaminants behind it," she said. "It's not just sitting down there as pure CH4 (methane). It's in a whole bath of hydrocarbons," she said, and some of those "can be problematic."

Want to tell us about your own experience? Click here.