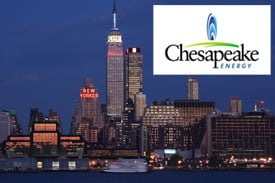 For now, New York City’s water appears to be safe from drilling. Responding to mounting concerns that chemicals from natural gas drilling could contaminate drinking water, Chesapeake Energy Corporation declared it will not drill in the city’s upstate watershed, the pristine water source that supplies unfiltered water to 9 million downstate residents.

“Our research has shown we are the only leasehold owner in the New York City watershed, and so Chesapeake is uniquely positioned to take this issue off the table,” Chesapeake CEO Aubrey McClendon said in a released statement.

Chesapeake owns leases for 5,000 acres of the watershed, which falls within the Marcellus Shale, a deeply buried gas-rich rock formation that is poised for development. McClendon told The New York Times that the company’s holdings in the watershed are “a drop in the bucket” compared with the 1.5 million acres it has leased across the shale formation in New York and in other states.

“How could any one well be so profitable that it would be worth damaging the New York City water system?” he said to the Times.

Chesapeake’s announcement came after more than 18 months of turmoil over drilling in the watershed. Gov. David Paterson issued a de facto moratorium on permits for drilling anywhere in New York’s portion of the Marcellus Shale after a July 2008 article by ProPublica raised environmental concerns about the drilling process. Paterson ordered state officials to conduct a fresh environmental impact analysis, and New York City representatives began asking for a ban on drilling inside the watershed. When the state’s analysis was released late last month, it proposed conditions that would allow drilling to go forward in the watershed and sparked a clamor of protest.

Environmentalists and city officials applauded Chesapeake’s announcement, but they are also urging the company to take its pledge further and sell its leases in the watershed to the city for $1.

“That way, the good words we’ve heard today will not be undercut by an unforeseen corporate deal a year or two from now, once this controversy has passed,” Manhattan Borough President Scott Stringer said in a statement.

James Gennaro, a New York City councilman who chairs the city’s committee on environmental protection, is among those who have urged the state to ban drilling in the watershed. “What does it say when gas companies show more sensitivity toward protecting the water supply for 9 million New Yorkers than the Paterson administration and the state's environmental regulators?” Gennaro said in a statement Wednesday.

Kate Sinding, a senior attorney with the Natural Resources Defense Council, said that now is the time for the state to pass a ban. “If Chesapeake is right that they’re the only company that holds leases in the watershed, then there’s no property interest that the state would have to compensate to impose a ban on drilling in the watershed,” she said, alluding one of the obstacles state officials have said precludes a ban. “It’s the perfect time.”

Responding to Chesapeake’s announcement, Yancey Roy, the spokesman for the state Department of Environmental Conservation, said the state’s environmental review had made drilling in the watershed so restrictive that Chesapeake had few options. “The drilling companies will all make their own decisions about where to invest,” he said in an e-mail, “but the Chesapeake announcement provides a clear indication that the state proposal contains rigorous protections for the watershed.”

In Chesapeake’s statement, however, McClendon offered another explanation. “Though Chesapeake believes it can drill safely in any watershed, including New York City’s as confirmed by New York’s Department of Environmental Conservation’s supplemental Generic Environmental Impact Statement (GEIS), we have chosen to focus our efforts on more promising areas for gas development in the state.”

The company’s announcement takes many of New York City’s concerns off the table, but others, including what will happen with the wastewater from drilling across the state, remain. The first of a series of public hearings on Marcellus Shale drilling in the state will be held tonight in Sullivan County, with others to follow throughout the state.