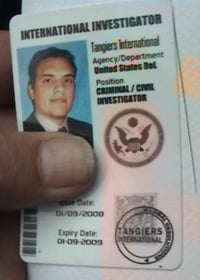 WASHINGTON — A company hired by insurance giant AIG to investigate federal contract workers injured in war zones is itself under scrutiny after an employee brandished an ID card that falsely suggested he was a government agent.

The Department of Labor has asked the agency's inspector general to investigate the actions of Tangiers International, a Maltese insurance services firm that AIG uses to document or dispute injury claims filed by wounded contract workers, labor officials said.

The inquiry arose after a video surfaced on YouTube in which a Tangiers employee operating in Australia is seen displaying an ID card with an official-looking seal that identifies him as an "international investigator" for the "United States DoL."

"Tangiers has no authority to make such claims or use DOL's name or indicia on its badges," Shelby Hallmark, the Labor Department official who oversees the federal workers' compensation program for injured contractors, said in a prepared statement (PDF). He said the Labor Department has never had a relationship of any kind with Tangiers.

Chris Catrambone, Tangiers' CEO, declined to comment on the investigation. Labor Department officials said Catrambone told them in an e-mail that the ID card was supposed to refer to "Division of Loss." He said the card had been "approved for use by the U.S. Embassy in Malta." Embassy officials in Malta, however, said the mission had never authorized any such cards for Tangiers.

"The U.S. Embassy has not approved the use of any identity card by Tangiers International," said Elijah Waterman, the embassy's spokesman.

Under federal law, it is illegal to impersonate a government official, a crime punishable by up to three years in prison. The government's inquiry into a major insurance company's investigative partner comes amid growing controversy about the care of injured contract workers and their families.

Insurance carriers dispute more than 40 percent of claims for serious injuries filed by contractors injured in Iraq and Afghanistan, according to an investigation by ProPublica, ABC News and the Los Angeles Times. Congress held hearings on the issue in June, and the Pentagon's inspector general has begun an examination of the system.

In fighting claims, insurance carriers typically rely upon investigative firms such as Tangiers. Company employees, often licensed private investigators, gather evidence to support or deny payment of disability benefits or medical treatments. They videotape contractors suspected of faking injury and interview friends and family to determine the circumstances of an injury.

Tangiers has made a specialty of investigating claims arising from the wars in Afghanistan and Iraq — a growth industry with claims soaring from fewer than 100 per year to more than 7,000 in 2008. Contractors now outnumber soldiers in Iraq and Afghanistan, according to Pentagon figures.

If Tangiers' business ethics were put into doubt, scores if not hundreds of claims could be affected. The authenticity of documents produced by the firm could come under legal question, adding time to an already lengthy claims process in which contractors spend months and sometimes years battling for benefits.

"At the end of the day, it could cause more litigation and more expense," said David Barnett, a Florida lawyer who has represented hundreds of injured contractors.

Labor Department officials said they had not ruled out using information gathered by Tangiers employees. The company's Web site states that it has investigated more than 240 cases in Iraq and 24 in Afghanistan.

"We do not reject out of hand reports submitted by any source, but assessing credibility is certainly a component of our reviews," Hallmark of the Labor Department said.

Tangiers has previously misrepresented facts when it comes to the workers' compensation system for contractors, required by a law known as the Defense Base Act, or DBA.

Tangiers removed the language in January 2009 after department officials asked them to do so.

AIG said it was investigating the ID incident.

"It is our commitment to handle claims professionally, ethically and fairly in every respect," said Marie Ali, a company spokeswoman, in a statement. "We are investigating these allegations. When that investigation is complete, we will determine what future action is required."

The video was taken by Mark Munro, an Australian security contractor wounded in Iraq when a suicide bomber attacked his convoy in 2005. In an interview, Munro said that in September 2008, he answered a phone call early one morning from someone with an American accent who immediately hung up. Later, a person claiming to be from AIG set up a meeting with Munro's attorney but never showed up and provided a phone number as a contact, but it was a non-working number.

Finally, Munro noticed that someone appeared to be following him as he drove around town. Munro said he confronted the man and demanded identification.

On the video, the person in the car appears reluctant, denying any knowledge of Munro. Then he pulls out a card and shows it to the camera. It identifies him as Cabot Goslin, a Tangiers employee. The card displays Goslin's mug shot, and under the heading "Agency/Department" is the phrase "United States DoL."

Goslin, an artist in Malta, did not return e-mails or phone calls requesting comment. In his e-mail to Labor Department officials, Catrambone said that Goslin no longer works for Tangiers and that the company no longer uses such an identity card.

Munro, who has been diagnosed with severe post-traumatic stress disorder, or PTSD, said he was upset that someone would follow him and his family around town.

It is not clear why Goslin was following Munro. AIG has not disputed Munro's claim and has faithfully paid his doctor bills and disability benefits, Munro said. Munro is seeking to sign a settlement with the company, although AIG has not responded to Munro's attorney's letters in nearly a year.

"At the time, I was furious. It was such a joke," said Munro. He said he had done everything AIG asked him to do. "And they just ignore us."