It is one of the most striking and curious statistics contained in a recent Bureau of Justice Statistics report on hate crimes in America: 54 percent of the roughly 250,000 people who said they were victimized in recent years chose not to file a formal complaint with the authorities.

The Matthew Shepard Foundation, an advocacy organization based in Colorado that played a role in successfully pushing for national hate crime legislation, has recently tried to better understand the phenomenon. The foundation began asking the Denver residents notifying the organization about being victimized to explain why they did or did not report the incident to the police.

The effort began in February and so far has produced a modest 15 responses — not all of which appear to be crimes. But in a country largely bereft of reliable or probing data on hate crimes, the information collected by the foundation has value.

The foundation, which shared its data as part of our Documenting Hate project, agreed to make public some of the responses to the question on reporting to authorities. The responses are anonymous, but they offer glimpses into the mix of forces at work when victims are deciding what to do: confusion about the definition of hate crimes; skepticism of the commitment by law enforcement to aggressively investigate; fear of retaliation.

“They echo what other organizations have heard through listening sessions, meetings, and the national victims of crime survey responses,” said Jason Marsden, the foundation’s executive director, referencing the Bureau of Justice Statistics’ report.

For one transgender person who reported that homophobic slurs and beer cans were hurled at them, the answer to why they reported the assault to the police was clear: “To get these men charged with a crime.”

For others, there was confusion as to whether what happened to them was worth reporting to the police.

One of the responses came from a gay woman who had felt menaced by a drunk man, who screamed at her: “You fucking dykes are all going to hell.” The woman said her main concern was to flee the scene as quickly as possible.

She said it was also far from clear to her that the menacing amounted to a crime, “since it was just mean words.” It would take a real investigation to answer her uncertainty, but it’s quite likely the incident didn’t qualify as a prosecutable crime.

A Hispanic woman walking through her neighborhood wrote that she felt sexually harassed by passengers in a passing car.

“Working or walking?” she said they asked her. She didn’t call the cops.

“It is just expected that women have to deal with this and it is a fact of our lives,” she wrote. “On a more logistical level,” she added, “I did not get the license plate number.”

A gay woman with short hair reported that another woman tried to bar her from entering the women’s room at a McDonald’s, believing she was transgender.

It was “pointless to report,” she said, though she added she had to physically move the woman from her path.

A number of the respondents did call the police, to mixed effect.

A gay, black man at a rally against President Trump’s travel ban said a passenger in a passing vehicle threw an egg at his face. When he contacted the Denver Police Department, “the dispatcher seemed unsympathetic,” he reported. “No police officer came to my assistance, although I felt I was in distress.”

Another gay man said he was followed around a store by an angry man who yelled homophobic slurs at him. “I refuse to allow anyone to attack me like this, so I reported it,” he wrote. He went on to say, without further explanation, that when it was all over, he wound up being ticketed by the police for “disturbing the peace.”

A disabled lesbian woman in the city’s suburbs said a neighbor tried to run her down with his car. She said she wanted to call the police, but that she was afraid. 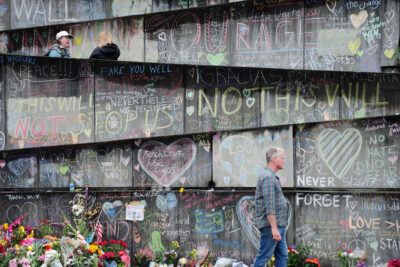 Hate crimes and bias incidents are a national problem, but there’s no reliable data on their nature or prevalence. We’re collecting reports to create a national database for use by journalists and civil-rights organizations.

“I often think I will not be believed or taken seriously,” she wrote. When she called the police anyway, she asked the officers not to confront the man, fearing retaliation for filing a report.

“I knew that reporting the incident was important — both to notify authorities to have the incident documented, to have evidence of harassment on file in the event of a future incident, and because no matter who I am or what my sexuality is, I knew this was wrong and potentially criminal,” she wrote.

When a recently disabled gay man said he was attacked by another man who’d asked for bus fare, he said he was prevented from calling the police by his assailant. “Faggot, you calling the police,” the man reportedly said as he punched the victim. Luckily, he wrote, someone else called the authorities for him. He thought the cops were great.

“They were very compassionate,” he wrote, adding that the officers offered to have a victim advocate talk with him, and came back later to check on him.

In all, most of the people surveyed did not report incidents to the police.

“My take on the results mostly is that people are not reporting because they just don’t think the police are going to take it seriously enough, or they don’t think the incident went to that level,” said Stephen Griffin, who the foundation contracted with to implement the survey.

Christine Downs, a spokesperson for the Denver Police Department, said by email that even if a person doesn’t believe what happened to them was a crime, they should report the incident to the police.

“The Denver Police Department strongly encourages all residents to report crime, regardless of how insignificant they may think it is, especially bias-motivated crimes,” she said.

Marsden, the Matthew Shepard Foundation’s executive director, plans to try to expand their survey to other cities to keep learning more about why people don’t report incidents of hate, and to take what they learn to the police officers they work with.

“I think that can help keep people safe and help on the prevention side of things,” he said. “You have to be an optimist in this line of work.”