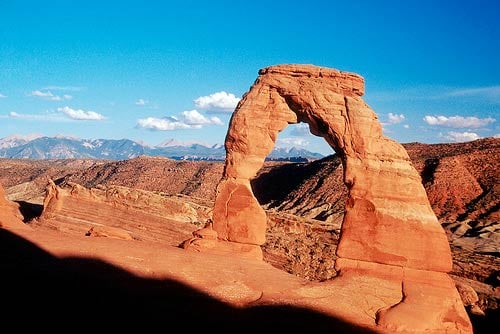 As we have been reporting, natural gas drilling can involve toxic chemicals used in a process called hydraulic fracturing, and has led to problems with water contamination across the country.

The letter – which implores the president elect to reverse gas leases and refund the money paid by energy companies – comes three days after the Bureau of Land Management auctioned off some 148,000 acres of land near Arches and Canyonlands National Parks despite fierce opposition to the sale.

The lease controversy began in November when the BLM issued a sweeping study laying out the legal framework for energy development in the region over the next 20 years. The plans included 60,000 acres in Utah that could soon receive wilderness designation in a bill currently before Congress.

The BLM then announced that its regular December lease sale would auction off almost 400,000 acres for drilling, including parcels adjacent to Arches National Park. Some of the drilling rigs could be clearly visible through the famed Delicate Arch, the wind-hewn stone bridge feature on Utahâs license plate. A typical recent lease sale in the area in the past few years is about 75,000 acres.

When the December sale was first announced it drew loud appeals not only from environmentalists concerned with local water supplies, but from senior officials within the Department of Interior. Cordell Roy, the National Park Serviceâs administrator in Utah, called the lease sales ''shocking and disturbing."

"There is a rush on, before Bush leaves office, to get as much done as possible," Jim Baca, a former head of the BLM under the Clinton administration told ProPublica earlier in the month. "Any leasing thatâs done from here on out would be ethically suspect."

Utahâs office of the BLM has defended the sale, explaining that it is routine and the department is obligated by law to make the parcels available.

The lease auction went ahead on Friday, but not before the BLM twice reduced its size, finally arriving at the 148,000 acres. Even that sale has sparked protestsâand apparently efforts to undermine it.

Despite the sale having taken place, the results are in limbo. Environmental groups had filed an earlier lawsuit to stop the sale, and a federal judge has until Jan. 19, George W. Bushâs last full day in office, to decide whether to allow last weekâs lease sales to go through.

In the meantime, members of Congress have stepped into the fray. The letter to the Obama team, dated Dec. 22, is signed by Democratic Reps. Rush Holt of New Jersey, Maurice Hinchey of New York, Brian Baird of Washington and 55 other members of Congress.

"We are writing to ask your assistance in revising these disastrous land-use plans and reversing the oil and gas leases," the letter reads. "The BLM chose not to protect these lands from damaging activity. Now, Utahâs unbalanced land-use plans are having real repercussions on the land."

It is unclear what options the incoming Obama administration will have if all the lease sales are approved. Reversing contractual leases is difficult and could land the administration in court.