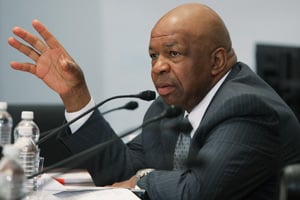 Rep. Elijah Cummings, D-Md., said Wednesday that he will introduce legislation later this year to improve the delivery of medical care to civilian contractors injured while working with the military in Iraq and Afghanistan.

Cummings declined to provide details about his proposal but said he hoped it would reduce the $300 million a year paid by defense contractors to insurance companies.

"The system is broken, and the insurance companies have reaped the benefits," said Cummings, who pushed for hearings earlier this year after investigations by ProPublica, ABC News and the Los Angeles Times found that insurance carriers routinely denied claims by injured contractors.

A new study (PDF) released Friday found that insurance carriers charge defense contractors far higher rates in war zones to cover routine injuries and accidents. That baffles congressional officials, who have noted that the government separately pays for all war-related injuries to civilian contractors. Why, they ask, should it cost significantly more to insure an employee in Iraq against a slip or a fall than one in Tunisia?

"The industry report underscores the need for major reforms of a very expensive and broken system that ostensibly is designed to help private contract workers in places like Iraq and Afghanistan," Sen. Bernie Sanders, I-Vt., said in a statement. "Insurance companies such as AIG should not make unjustifiable profits by overcharging the U.S. government for basic workers' compensation. During the June congressional oversight hearing, I pressed the Pentagon and the Department of Labor to make the necessary reforms so wounded workers get the support they deserve. The Pentagon has said that the recommendations will be on my desk next week, and I will take a hard look at their ideas."

The study by insurance broker Aon Corp. was an internal review of 18 anonymous defense contractors which purchased the specialized workers compensation policies required under a federal law known as the Defense Base Act. Most of the firms were charged higher rates for workers compensation insurance in Iraq and Afghanistan than for comparable workers hired in other foreign countries.

In some cases, defense companies in Iraq and Afghanistan paid more than double for the insurance, which covers medical costs and disability benefits for injured civilians. One defense firm paid 18 percent of its payroll for insurance -- meaning that the company had to spend $18,000 to purchase a single workers' compensation policy for an employee making $100,000 a year.

The cost of such policies became controversial after 9/11, when rates skyrocketed as civilian contractors flooded into Iraq and Afghanistan. An arm of troubled insurance giant AIG, recently renamed Chartis, sold the bulk of the policies, turning an obscure and lightly regulated insurance line into a billion-dollar business.

Taxpayers ultimately pay for the insurance as part of the cost of federal contracts.

Congressional investigators and government auditors have accused AIG and other carriers of exploiting a market with limited competition to overcharge for the insurance, pointing to profit margins as high as 40 percent on some policies. Insurance firms, however, have said that higher premiums reflect heightened risks of routine injury in Iraq and Afghanistan.

Charlie Skinner, the Aon managing director in charge of the market survey, noted that Iraq's roads are in poor shape after six years of war, raising the possibility of more road accidents. The survey did not directly examine, however, whether underwriters factored in war hazards in determining policy rates. "You might need to talk to underwriters to drill into that. We don't get inside their rating models," Skinner said.

The study, the largest of its kind to date, mirrors earlier findings by the GAO and the House Committee on Oversight and Government Reform. It comes as the Defense Department prepares to release recommendations later this fall on ways to overhaul the system.

One option under consideration would replace private insurance with government insurance -- a potential blow to Aon and other firms in the industry. Skinner said Aon had contributed "factual" material to the Defense Department, but he declined to say whether the firm had recommended a course of action.

"As in most insurance and risk management decisions, there's often not a black and white answer," he said.

Cummings said the new legislation would "create some cost containment and improve the care for the brave men and women assisting the military."